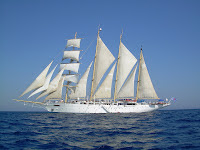 The cruise aboard Star Flyer was in celebration of our fortieth wedding anniversary. It is the single most extravagant thing we have ever done. Painfully aware that Bob and Bonnie's fortieth anniversary was their last one, we know that everything can change -- just like that.
. . . .
And so we opted for some extraordinary way to celebrate, to be together.
. . . .
Caught up in the busyness of our lives -- our calendars, jobs, activities; Palm pilots, telephones, cell phone; email, bills, commitments; even our children whom we love so much -- what initially drew us together gets put on a back burner somehow.
. . . .
Away, at sea, in a magical place, with no responsibilities apart from applying sunscreen and drinking water, with none of the busyness to distract us, we fell in love all over again.
. . . .
It was the last day of the cruise. We knew that Star Clippers was going to have a cake for us at dinner (we didn't know, however, that this would include musical instruments, a ceremony involving a napkin tied around our hands, and waiters singing, "I Can't Help Falling In Love With You"). Instead of allowing Ilya to seat us that night, we decided to ask the people whose company we had enjoyed throughout the week to join us. We'd found almost everyone and were sitting on deck when Yvonne passed by.

"Yvonne," I said. "Would you and Lindsay join us for dinner tonight?"

"Of course, luv," she replied. "Any special reason?"

"Oh, I don't know. I never pay attention to those things."

"Yes," he replied. "It has been ordered and I'll give it to her when we get home."

And thus he did. 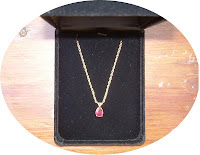 floribunda said…
what a nice guy Joe is! I've really enjoyed reading your travel stories, and the photos are great. Congratulations on the 40 happy years and I wish you many more!

Tanya said…
Wow! What an exciting cruise and what a romantic husband! I know we have to use the time we have and enjoy it in special ways. I hope I can convince Tetsu someday!!! Your pictures are just wonderful!!!

Marla said…
I just read all of your posts on your vacation. What a wonderful trip. How romantic of your husband to have a ruby waiting for you when you arrived home. Congratulations on 40 years.
Thursday, August 02, 2007 8:35:00 AM