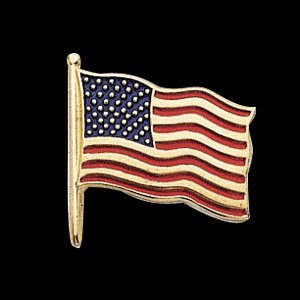 Well, we watched "the debate" last night. It seemed to be misnamed. It wasn't a debate, really, but rather an opportunity for the interrogators to bring up all of the media frenzy tidbits (truth about peril during Bosnia landing, why can't you control your pastor, that kind of thing). It was pretty much a waste of time, as the candidates really did not get to explore their differences on many meaty issues.

I was really peeved by the question that was patched in from a righteous (and perhaps bitter!) Pennsylvania Woman Of A Certain Age, who suggested that perhaps Senator Obama was not proud of the American flag because he didn't wear one.

Is it just me? Or did anyone hear that question put to Senator Clinton as well -- she wasn't wearing an American flag pin either?

I consider myself a political novice (and Andrew would prolly be the first to applaud that assessment), but at least I'm not planning to choose my candidate on the basis of his or her jewelry.

Oh, and completely off topic but noteworthy nonetheless, the Queen of Issues yesterday was whining about the unhealhy food selections in the campaign office shortly before the entree du jour was scheduled to arrive. When offered a jello cup, she indignantly replied, "I'm a vegetarian! I'm not going to eat that!"

lj_cox said…
I really like reading your blog; thank you for all the interesting posts about quilting and religion and other topics Near Philadelphia. I'm Not Far from Philadelphia, myself.

Re the jello refusal, that's actually logical on the vegetarian's part (no matter how illogical anything else she objects to may be.) Jello, unless it's the specially made vegetarian version, is made with gelatin, an animal product.
Thursday, April 17, 2008 9:15:00 AM

Nancy Near Philadelphia said…
I knew jello contained an animal product, so I wasn't surprised that she declined.

It was the zeal, the insistence, the passion, the LOOK AT ME ness of the episode that made me cringe!

SallyB said…
I, too, watched the debate - at least until I fell asleep toward the end. And I can tell you that I was peeved that they brought up such trivial crap about who Obama was associated with and the American flag bit and things that were said - and not said - and so forth, instead of focusing on the important issues of the day like health care, Iraq, the economy, etc.

The mainstream media ought to be ashamed of itself for focusing on such unimportant stuff that is nothing more than a distraction from what needs to be said and what the candidates are going to do about solving the important problems we face as a nation. I was glad that Obama took the moderators to task for asking such dumb questions like they did. Good for him for sticking to his guns - so to speak.
Thursday, April 17, 2008 9:55:00 AM

Mrs. Goodneedle said…
The Queen of Issues has been, seemingly, ignored throughout her life or at least has a deep seated 'need to be noticed.' I'm weary of politics as presented by those exerting so much energy on spin, I can't imagine how the politicians deal with all of that as well as they do.
Friday, April 18, 2008 7:23:00 AM

*karendianne. said…
I was so glad to read this! I'm so completely NOT interested in the miscellaneous garbled gab.

I hear George S. commented on the shabby job they did [on ABC] today in the New York Times.

Perry said…
I didn't watch the debate; I am so sick of the 2 of them I couldn't stand another you said, he said. And the queen wouldn't eat the jello because gelatin is an animal byproduct. I don't see how you can keep from saying something to her, lol.
Saturday, April 19, 2008 5:13:00 AM

*karendianne. said…
Just so you know, I'm trying not to get distressed over your State or anything but I think I actually MIGHT NEED A DRINK on Tuesday night.