Karen has asked to see Design Walls. And I promised to post pictures of recent purchases. So this post will be a flurry of photos of both categories. Read on if you dare! 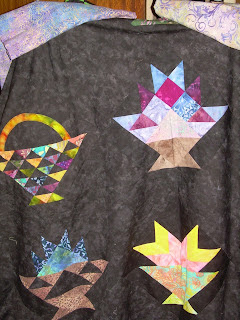 Pretty many years ago we had a swap of Batik Baskets on Black. The yield was beautiful. I finally got them assembled about a year ago and decided I wanted it for our bed. So I added a black border, then a turquoise border, then more black. And then ripped all three borders off. Turbo had a thought -- she suggested a narrow light border and then a wider medium border and then black binding. I thought she was right. So when I was at Lancaster, I bought the borders. As soon as I get them on -- with any luck, during the coming week -- I'm sending it off to Kat to machine quilt for me to pick up when I'm in her neighborhood in July! 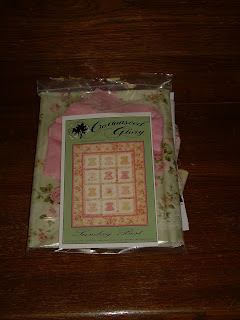 On the pew is the pattern and the border fabric for "Sunday Best," the wall hanging I'm hand appliquing for Caroline. I found some amazing miniscule buttons to put on the desses. About four or five of the dozen dresses are done. I work on this in front of the TV. When the movie has subtitles, I don't understand very much of it! 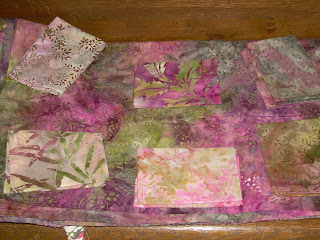 Branky gave me a collection of FQs for doing her a favor a few months back. When I was at Lancaster, I found a perfect coordinate. Don't know yet what this is going to become. 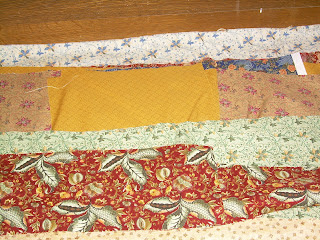 Also on the pew are these scraps left over from a project Sherron was working on the last time we were at White Oak. I guess my ooohing and aaaahing worked, for when she was done she gave the scraps to me! 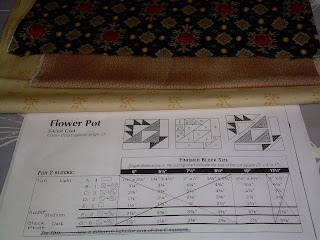 Not the brightest and best picture. I fell in love with the black fabric about five years ago when I was at The Old Country Store. I bought a couple of yards and also bought background fabric and a half yard each of about six coordinates. April is my month to send out packets to the FQ group and I had a good time assembling them with copies of the Flower Pot pattern. Each participant will make me a pair of blocks, and by the end of May, I would think, I should have back enough to make a very good show and tell post. 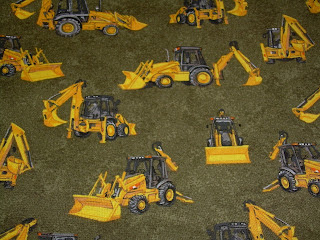 "Diggers" are Sam's current passion. This fabric is to make a tote bag for him to carry his books back and forth from the library. 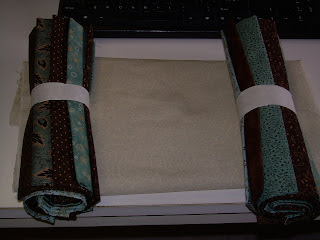 At the site of the old Bird In Hand Country Store, the place that was famous for the neon green rulers, is a new place and I think it is called the Log Cabin Quilt Shop. They have some things that no one else has. Like these teal and brown FQ sets. And the wonderful background. 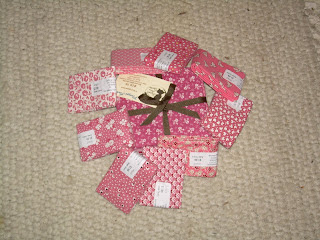 One of the things on my list for the Show was double pink FQs to go with my brown FQs from the swap. I found 'em. 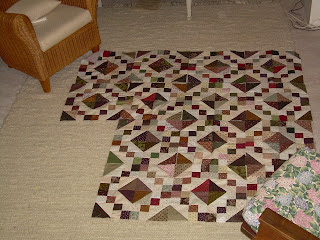 Jewel Box Leader/Ender project is moving along, nearly finished. Except there are plenty of components cut and remaining so I'm thinking instead of 16 blocks, it is going to be 20. Or so. 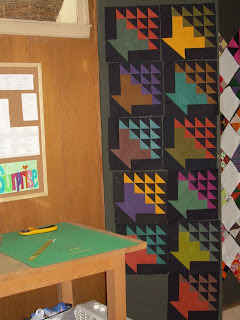 My Design Wall is a masterpiece creation of my wonderful husband. It has a flat center surface and then two flaps that open up, giving me several different surfaces, and when it is all open, space for a very large project. These Bright Baskets are from the February birthday block project; when it is complete I should have received 18. The colors are all hand dyes. I love them. Had planned the final project as a gift, but seriously doubt I'll be able to part with it! 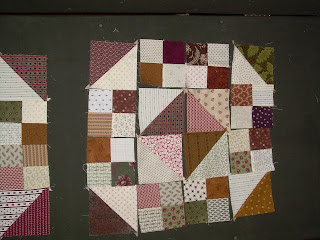 More Jewel Box units on the inside flap of the design wall. 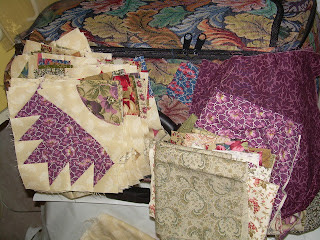 What Was I Thinking? is moving along beautifully. The Claws portions are close to done! Once they are, I'll start putting the sides on. 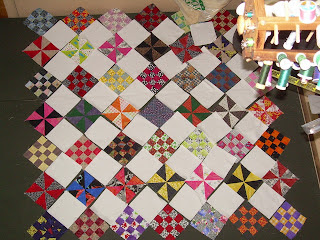 Bright and Cheerful squares, a gift from Turbo, on the main portion of the design wall, alternating with Kona white. Am thinking this will be a graduation gift for a young woman from church that I'm inordinately fond of.
There are more purchases of fabric, of course, but some are a secret, and others will have to wait for another post. 'Cuz I gotta get back to the sweatshop, erm, sewing room.
Email Post

*karendianne. said…
Nancy this is so fun! I am absolutely in love, luscious love with the Bright Baskets. Seriously!

That Design Wall/Set Up you have made me sooo glad I asked because this is SLICK! I'd rather have something like this. And gosh the Bright and Cheerful squares aren't doing you any good there at your house. Send 'em here.

Its all so good, all the stuff you have here, and the stuff for Sweet Caroline, too.

SHERRON gets the COOLEST OF THE DAY award for sending you those great scraps. Does she need another friend? Hee!

The Calico Cat said…
Cottonseed Glory is one of my "local" quilt shops. Annapolis isn't that local, but they are on the local shop hop circuit & I do got over there every once in a while.
Monday, April 07, 2008 8:00:00 AM

Tanya said…
I cannot believe all that you are doing at one time! That is amazing! I love your husband's design board. What did he make that out of and what have you got there to keep them sticking? Dark flannel? And the purplish batiks are just the sort of thing I would love working with!
Monday, April 07, 2008 9:03:00 AM

Mrs. Goodneedle said…
Looks like my house; so many projects in different stages of construction that you'd swear I suffer from ADHD!
Monday, April 07, 2008 9:05:00 AM

Guenveur in Kent said…
I'll bet that Sam likes Mike Mulligan and his Steamshovel. John used to get it out of the library so much that the librarian suggested the book Mike's House, about a boy who called the library that.
Thursday, April 10, 2008 12:59:00 PM