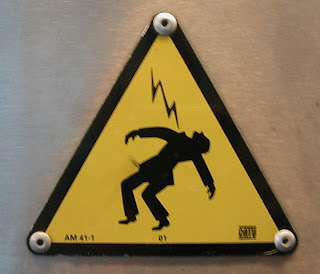 If you've been reading this blog recently, you would be expecting me to be feeling a bit less than splendid this day. And you'd be right. The loss of Obama to Hillary was not unexpected; but the ten percentage points is painful -- we had so hoped it would be less. So I'm saddened by the outcome of the election, listening to the spinners on what it means, and waiting to see what happens next.

But I'm shocked and stunned, nonetheless.

Because of a telphone call that came literally moments before CNN proclaimed the winner. The caller was a relative who lives far away; she is someone we see about every three years and have phone conversations with approximately four or five times each year.

I answered from the phone that does not have Caller ID, and her response to my "Hello" was "Well, did your candidate win?" I recognized the voice and replied, "It seems to be a little too early to tell. How are you?" She told me that it wasn't too early to tell, that the television station she watches had proclaimed the winner and wasn't it grand. I was uneasy at that point and mentioned that the outcome of this election was extra important to me because of the time I'd spent working at the campaign headquarters. When the caller learned which candidate I'd been supporting, I was the recipient of her scorn, her derision, her mockery -- "Well, I guess I should have talked to you sooner!" When she belittled me for voting for "a Muslim," I told her that her comment was so offensive that I wasn't going to continue the conversation and handed the phone to my husband.

I was shaking. Literally shaking.

At the school where I work, the Quakerism focus during this entire academic year has been on the theme of Equality. We have looked at racism; we have danced around anti-Semitism. We have begun to acknowledge that as liberal as we believe ourselves to be, there are seeds of racism within us. We have begun to look at the fact that as middle-class white Americans, we are persons of privilege. We have recognized that privilege carries responsibility. We have begun to understand that -- unlike many others -- those of us who are white do not have an awareness of our whiteness at all times. There are more than 150 employees here, and almost everyone has been moved, has grown, from our work together.

One of the joyful pieces of my experience at Obama for America these past weeks has been the equality. As a white middle-aged (dare I still claim "middle-aged" or should I perhaps be acknowledging "older"?) woman, I walked into that office on the first day with a little trepidation. My experience with blacks outside of my Quaker environment has been a perception that I am regarded with caution and sometimes with suspicion, because I am a white, middle-class person. This is understandable. But there was none of that in the campaign office. I spent my late afternoons elbow-to-elbow, eye-to-eye, with all ages and colors of folks, and we worked as one, and regarded each other as sisters and brothers. It seemed to me that simply because I was there, I had passed a test.

I experienced a welcoming solidarity, a togetherness and a unity, a pulling together for something so much more important than ourselves; something I have never known before.

So I was vulnerable last night when the phone rang. I knew it was going to be an emotional evening, and declined an invitation to watch the returns with my own sister, thinking I'd be better off in the privacy of my own home. I was totally unprepared for the intrusion that blasted me.

Harkening back to Luther and his admonition to ascribe the best possible explanation to our neighbor's (relative's?) offenses, maybe my relative wasn't trying to be mean, hurtful, and racist. Maybe she wasn't gloating but instead, trying to be funny. If so, in my vulnerability, I missed the subtlety of her humor.

Juliann in WA said…
This post has really struck a chord with me. I am so touched by your willingness to be so transparent and reflective. Be gracious to yourself also.
Wednesday, April 23, 2008 8:36:00 AM

SallyB said…
I attribute Obama's double digit loss in PA to all of the big brou-ha-ha that the media made over his "bitter" comment. And quite frankly - and sadly - I heard a lot of folks say that they're just not ready for a black President, which is sad, because 40 years have gone by since MLK was assassinated and it pains me that we haven't made more progress in racial matters since then and that there is still such suspicion between the races that people can say that they're not ready to elect a black President.

Three Birds Inspired said…
I didn't even watch the returns last night simply because I didn't want to deal with my feelings. I wasn't surprised, just disappointed. My belief is that the fact that Obama is a black man is the reason he could not win in Pennsylvania. Sadly, I honestly believe that Hillary Clinton could never beat McCain in the general election. Obama is the only candidate than can.

Sherry said…
While I don't want to sound like I'm making excuses for your relative, many, many people (my DM and DH included) don't get all the facts before they make comments. . .they hear something on the news & don't "dig" before passing on that same "sound byte".

It's just like alot of Urban Legends that come through emails -- everyone takes it as "gospel" but a quick check on snopes.com shows that it is a hoax that has been "making the rounds" for years.

Politics would definitely be a completely different game if information, rather than spin, was given --- and if ALL voters were informed and involved beyond the voting booth.

tami said…
It really saddens me that people still believe the bad press and they are so closed minded about race and religion.
I couldn't watch the returns last night after I saw that he was losing the primary. I am not a terribly political person, but he is the first candidate in my lifetime that I actually feel would not be making the "lesser of 2 evils" choice. I just don't understand why everyone doesn't see it my way!! I am just hoping so much that he ends up the candidate so we get a chance to see what he can do for our country.
As the race has gone on I feel Hillary is becoming more and more childish with each issue that comes up. What does that say about her ability to lead a country?
Wednesday, April 23, 2008 10:57:00 AM

Leslie said…
At my house we teasingly say that you shouldn't test a friendship by talking about God, religon or politics. But I find it refreshing to discover there are those that can and do! I'm not pro Obama or Hillary but I (too) was shocked to hear that 30% of the voters chose Hillary because they didn't want to vote for a black. I agree with Sallyb - 40 years since MLKJ and Pennsylvanians are actually willing to go on *record* with that information? More prayer - and antiracism education - needed.
Wednesday, April 23, 2008 11:13:00 AM

Ms. Jan said…
I'm sorry for your loss, Sistah; especially the 10 points. Your relative sounds like my relatives, who, if I talked to them would use words far more hateful than "black." Just one of many reasons we don't talk much. I hate how petty and mean spirited things have gotten. Don't despair, the fat lady hasn't sung yet!
Wednesday, April 23, 2008 12:04:00 PM

LoieJ said…
As a person in a mixed race family, I rarely hear stuff that mean and shallow. I guess people usually don't speak that way directly to others. Maybe the person is really ignorant or thinks of the phone like a shield, just like people will put stuff on blogs or internet groups that they probably wouldn't say directly to someone.
Wednesday, April 23, 2008 1:18:00 PM

It's far from over. As I mentioned in my blog post on the subject, the whole primary season is merely unfolding as expected.

Ultimately, the super delegates are going to have to take a stand and decide. IMO, the sooner the better to allow time for the loser (and his/her supporters) to get over it and get behind the winner.
Wednesday, April 23, 2008 1:23:00 PM

Unknown said…
what is a disgrace is so many of the religious right will not vote for him because of race. does the our father mean different things in other sects.
Wednesday, April 23, 2008 10:49:00 PM

*karendianne. said…
Its almost impossible for the Visionary in this world. And You've been keeping it alive. It isn't easy. Everyone wants to tear down the Visionary.

You are about something more. You are part of a Vision not just a Movement.

graceamazes said…
On a personal, rather than political note, I don't know whether I was more shocked by your relative's ignorance, prejudice or just plain rudeness! I can certainly understand why you were shaking!

Guenveur in Kent said…
It ain't over 'til it's over. I thought that "Muslim" stuff had been laid to rest but I guess there are those who've already mnade up their so-called minds regardless. They ca't handle the truth.
Anyway, that is one rude and clueless relative. Can one divorce distant relatives?
Thursday, April 24, 2008 12:24:00 PM