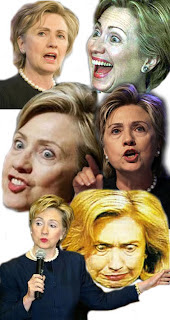 In my strong support of Barack Obama, I've made a real effort not to speak unkindly about Hillary Clinton. And I'm not going to start now.

Instead, I'll let her and her handlers speak to what's on my mind:

First, from Ms. Clinton herself:

Hillary Clinton today brought up the assassination of Sen. Robert Kennedy while defending her decision to stay in the race against Barack Obama.

"My husband did not wrap up the nomination in 1992 until he won the California primary somewhere in the middle of June, right? We all remember Bobby Kennedy was assassinated in June in California. I don't understand it," she said, dismissing calls to drop out.

Rangel -- who was the first to suggest that Clinton run for the Senate in 2000 -- confirmed to NBC News that Clinton did tell the participants on the conference call that she would be interested in running for vice president.

On the subject of Clinton and the vice presidency, Rangel told NBC that "certainly to the extent that she will do anything to win ... she'll be available"

"She'll do whatever is needed -- if people think it would help she'd do it," he added.


And, again, from Ms. Clinton:

(CNN) – Hillary Clinton herself directly raised the issue of serving as Barack Obama's running mate in a conference call with New York lawmakers earlier Tuesday, a source who was on the call tells CNN's Candy Crowley.

According to the source, Clinton told those on the call that if asked by Obama, she would be interested in serving as his running mate. That comment was not in response to a particular question.


These comments came a little too close together for my comfort level.

Three Birds Inspired said…
And THAT is the reason that some folks are very concerned about the possibility of her being offered the position of VP.
Wednesday, June 04, 2008 8:46:00 AM

*karendianne. said…
I just cannot keep my head on. It spun off into oblivion. I grabbed it, glued it back on, tried to watch TV and it popped off again.

SallyB said…
Ummmm.....honestly, I think that the only way to unify and heal the deep rifts in the Democratic Party that have developed during this long and torturous primary season is for Clinton to agree to be Obama's running mate on the ticket. There are far too many swing voters who've said they'd vote for McCain before they'd vote for Obama, and to have Hillary on the ticket may just keep them from doing that. I hope.

Guenveur in Kent said…
Whoa there! There's a rather unpleasant implication in this entry. Or am I being paranoid? I don't think there's any plot being hatched and she's not Lady MacBeth regardless of how people seem to view her. She's put her foot into her mouth a lot lately, but she's not an evil person.
Wednesday, June 04, 2008 7:49:00 PM

Nancy Near Philadelphia said…
Not paranoid, friend, but overreacting. No, not evil, and surely not behind some plot. But something else that I can't quite put my finger on -- something like opportunistic. And I don't like it.

Unknown said…
It's very interesting watching all this from across the pond - from a total novice's point of view(in US politics that is) I do find it a little irksome that she can suddenly be best buddies with Obama to at least get a bit of a bite at the cherry being VP running mate - or is that just me looking at it from a British naive simplistic viewpoint. I just can't see her in a supportive role without trying to muscle in all the time (not to mention Bill)
Thursday, June 05, 2008 3:14:00 AM