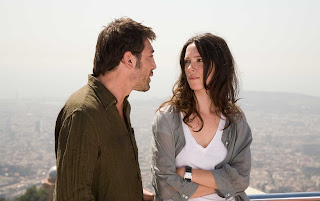 Main Entry: dec·a·dent
Pronunciation: \ˈde-kə-dənt also di-ˈkā-\
Function: adjective
Etymology: back-formation from decadence
Date: 1837
1 : marked by decay or decline
2 : of, relating to, or having the characteristics of the decadents
3 : characterized by or appealing to self-indulgence

My job is at an independent school Near Philadelphia, and for most of the year I work from 7:30 in the morning until 4:00 in the afternoon. These hours suit me well, as I like to get up early and do my best work before noon. For nine or ten weeks each summer, however, we have the opportunity to enjoy "summer hours," i.e., working from 9:00 until 2:00, or some variation.

One of the things that Joe and I enjoy during summer hours is going to the 4:00 movie on a Friday afternoon. This provides an early start to the weekend and feels mildly decadent -- as though we are getting away with something, to be grabbing this headstart. This summer, for a lot of reasons, we had not been able to indulge this pleasure until yesterday, the very last day of summer hours.

We'd heard so many good things about "Vicky Cristina Barcelona," some of them even from people whose taste we respect and generally share. We were delighted to find it showing at our favorite theatre at 4:00 and being Woody Allen, it came with the bonus of not making us contend with subtitles. So off we went.

On the way home, we tried to figure out why we didn't like it. The scenery was lovely. The acting was excellent. The music was terrific. Some of our favorite people were in it, one of them with a hairstyle vastly improved over the last film we'd seen him in. There were scenes that were superb, the writing was well-crafted, and we could occasionally almost taste the wine.

But we didn't like it. And couldn't quite pinpoint why.

It was about three -- or four -- women and one man, exploring what love and relationship are about. And explore it they did, in many and various combinations.

But, you know, none of them really ever found it. There was a lot of talk about "having feelings for" someone. Feelings that were implied to be about love and relationship.

This morning at breakfast, Joe said, "It wasn't about love. It was about sex."

Guenveur in Kent said…
It was a Woody Allen movie. None of his movies is about love, but a lot about sex. mostly about the selfish kind. If you don't expect to find meaningful relationships from a Woody Allen movie, you won't be disappointed.
Saturday, August 23, 2008 12:31:00 PM