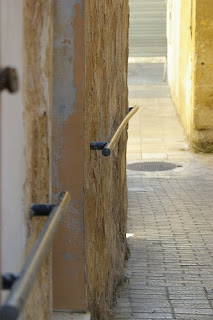 My friend Carol the Math Teacher has an expression for what happens to most of the kids during the summer between their Junior and Senior years. "They turn the corner," she says. The corner toward adulthood, away from adolescence. I've always liked the expression; it seems to indicate moving ahead, in the same direction, but in a somewhat better way. She'll point out kids who turn the corner early, and those who do it late.

Last week Joe turned the corner. We visited the cardiologist who indicated that he was doing well, tweaked the meds, and proclaimed he need not return until December at which point he will feel confident of a 99% success rate of the stents. Later in the week, I began to notice increased energy, less of a need for naps, and a general difference of some positive sort.

I think the vacation helped a lot, being away, having no demands, the opportunity to relax, to play, to think. We did some talking about what he'd been through; hadn't done that before. So my perception is that a corner has been turned, and it is a good one.

Did some sewing over the weekend. The Olympic binding event is going well -- I had three quilts to bind, and the batik baskets is done, so I'm thinking I've got a bronze. Started binding What Was I Thinking? for a silver. Yesterday I took a break from the binding event and entered the children's clothing event, getting most of a little jumper made for Caroline -- the bloomers and matching hat are on the list for this afternoon.

Have had a houseguest; Joe's sister who lives in rural Texas has been with us since Saturday and we've had a good time with her. Yesterday she and Joe drove down to Havre de Grace where they met up with Amy and Andrew for some sailing. Saturday night Sherry and her crowd were at our place for dinner along with Bonnie -- everyone made something and the meal was abundant and yummy.

Got all but one of the give-aways in the mail at the end of last week and the final one is going out today to Bobbie.

Oh, and the leader-ender Irish Chain is moving right along -- four blocks done and lookin' good!

Juliann in WA said…
I am glad about that corner turning point in your lives. And seems like you are really keeping up on the sewing end of things too. Enjoy.
Tuesday, August 12, 2008 10:50:00 AM

*karendianne. said…
This sure makes me so happy to hear/read. It seems like only yesterday everything was upside down, rug pulled out...

Now? Things put back, a couple new furnishings and now, Now we have new lives.

Tanya said…
So happy to know that your husband has turned the corner! Such miracles of medicine we have nowadays. Not to mention the care and concern of a loving wife!
Thursday, August 14, 2008 6:45:00 PM