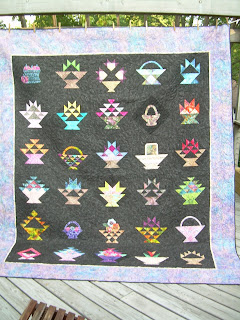 The Silver Medal goes to Batik Baskets on Black. These blocks were from a swap we did pretty many years ago. I always meant for it to be on my bed when it was finished, but got really stuck on the borders. I had put on a black followed by a teal batik followed by another block and hated the way it looked. So I picked them all off and put it aside for a year or two.

Turbo was over one afternoon and I sought her opinion. "A narrow light and a broad medium, both of batiks," she prescribed. And I believed her to be right.

I'm certainly not eager for cold weather, but as soon as it comes, this quilt goes on our bed. Custom quilted by Kat. 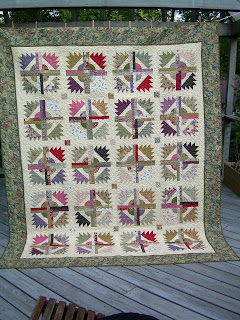 The Gold Medal goes to the infamous "What Was I Thinking?" More years ago than I can actually keep track of, I made one block from this pattern as part of a group project. When all of the blocks were assembled, I was smitten. I had my very first CW FQ bundle that I'd been fondling and wondering how to use, and "Ibby's Quilt Pattern" (since I never knew what the real name was) seemed to be just right.

Cut the first step and appliqued the circles and quartered them, and managed in the course of one weekend at White Oak with a lot of bad words uttered to get one block finished. And the project came home and was banished.

This past winter it came to the surface and it was found the time Tanya was finishing "When, Oh When?" and I looked at it and said, "What Was I Thinking?" Once rechristened, my interest in finishing it was revived and I worked steadily on it, one unit rather than one block, at a time. Also quilted by Kat, this is going to go on the bed in the guestroom, unless one of my children demands to have it. 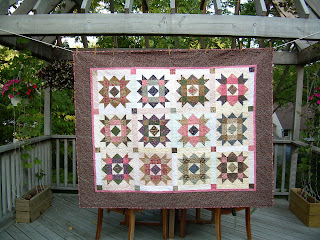 The Bronze: Meadowbrook Pasture, started out after inspiration from Nicole and the Meadowbrook Farm pattern. Used CWs from a swap and had a lot of fun putting the various combinations together. When it was time to set the blocks, the quilt nearly became renamed, "You've Got To Be Kidding," and though I was tempted to set it aside rather than go with the prescribed setting, I came up with my own way to set the blocks, and decided I liked it better. Quilted by Branky, this is to be a new home gift for some friends who are moving to a retirement center.

I've not been faithful the second week of the Olympics. I never am. I did a good job on several events during the first week, and then became distracted by the rest of my life. Tonight is the Closing Ceremony and I plan to continue the stitchery on the Living the Dream project. That's one that is going to be a WISP for many, many months.

The Naturalist's Daughter said…
Wow! Well done, they all look gorgeous. You certainly deserve a medal for finishing them all. I love the way you put Meadowbrook Pasture together, it looks great. What was I thinking is amazing. I like the baskets, but I adore "What was I thinking". Its definitely a gold medal. I managed to watch a fair amount of the Olympics, but fell asleep during the closing ceremony, and missed the handover bit.
Sunday, August 24, 2008 7:32:00 PM

dot said…
all very nice quilts and very worthy of the medals awarded. I like all of them and they could very easily fit into my home.
Sunday, August 24, 2008 8:01:00 PM

Tanya said…
Your What Was I Thinking is beautiful and is worthy of the Gold Medal!! And it looks so nice in that lovely guest room too! Wow, what a lot you've gotten done! You could open a bed and breakfast with your wonderful quilt decor and simple furniture! I'd surely choose to sleep under your quilts!
Wednesday, August 27, 2008 3:04:00 AM