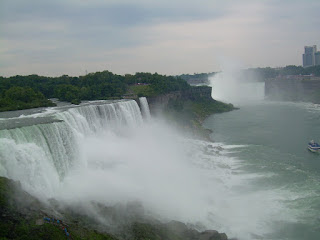 A week ago, we left Near Philadelphia for vacation. We had a long drive that first day, arriving at Niagara Falls late in the afternoon, after stopping at a mediocre Mexican restaurant outside Binghamton for lunch, and an hour or two later at a roadside rest for a bit of a nap. We arrived at Park Place B&B with a couple of hours to spare before dinner.

Louise recommended a good restaurant in town that we could walk to. We figured out later that it was the only good restaurant in town. Niagara Falls, New York, has a ghostly demeanor. There are many empty shops and boarded up buildings. After about six o'clock, there aren't many people out on the streets, either.

Our choices for dinner were the Red Coach Inn or the Hard Rock Cafe. We opted for the former, the one Louise had suggested. On our walk downtown, within a block of our B&B, we noticed an Indian restaurant. A block later, there was another. No pizza places or burger joints. By the time we reached the Red Coach, we'd counted three more including the Palace of India. After our dinner (which, by the way, was excellent and reasonable), on the walk home by a different route, we noticed two Indian restaurants. We were puzzled, and remembered that at the Red Coach, we'd seen a huge group of Indians, perhaps a multi-generational family or perhaps a tour group.

The Falls is spectacular. The attractions are well-organized by a tram that you hop on and off throughout the day, stopping at the Aquarium, the Maid of the Mist, the Observation Tower, the Cave of Winds, and all of the other spots. The parklands are gorgeous. The lines at the attractions are well-managed and move right along. A single purchase pass for $30 allows admission to everything. The Maid of the Mist boat ride is an exhilarating experience. But even it is outdone by the Cave of the Winds -- we had so much fun there, getting drenched as we stood with our backs just feet from the falls. If you've never been, you seriously might think about making the trip. Especially if you like Indian food!

One of the best things was the friendliness of the fellow tourists. People laughed together as we got soaked, and remarked on the fun we were having. People of different languages and cultures -- we even saw a group of Amish people, with their "civilian" driver, donning yellow raincoats at the Cave of the Winds -- all enjoying the adventure together.

At breakfast the first morning, we were joined by a family of five -- a pair of young doctors and their daughter, and the wife's parents. From India. We spoke of restaurants; they'd considered the Hard Rock, too, and declined. We recommended the Red Coach. "If you like Indian food," said Meera, "you might try the Punjabi Hut. Their cooking tastes just like my mother's."

Bravely, I mentioned the preponderance of Indian restaurants and sought insight. Meera said that people from India like to visit the Seven Wonders of the World, and Niagara Falls is, of course, on the list. I had known the latter, but certainly not the former.

That night we had dinner at a small place in Niagara-on-the-Lake in Canada and it was very nice. We never did get to the Punjabi Hut.

debijeanm said…
Sounds wonderful! My parents spent the first year of their retirement on a 17,000 mile tour of the United States (mostly the eastern portion). Niagara Falls was their absolute favorite and they give the same advice - everyone HAS to see it someday!
Friday, August 01, 2008 10:29:00 AM

Mrs. Goodneedle said…
Sounds wonderful! It's been eighteen years since I've visited the Falls. Glad you're relaxing and enjoying all that the area has to offer. Stay safe...
Friday, August 01, 2008 12:08:00 PM

Teresa said…
Sounds great. My husband went to the falls a couple of years ago and did not know about the all day pass. We stayed on the Canada side and although we enjoyed seeing the falls, we were turned off by all the casinos and commercialization of that area. Now I want to go back and see it the way you did!
Friday, August 01, 2008 7:43:00 PM

Guenveur in Kent said…
The thing is, you think this place will just be a cliche, but then you see the Falls and gasp in wonder. I took Emily and John there years ago and we did the Cave of the Winds, too. Amazing. I love Indian food. Just had some in Corning when I visited my sister. Great restaurant run by an Indian family. Deee-lish-us! The food, not the family, although they were attractive.
Saturday, August 02, 2008 11:20:00 AM

Unknown said…
We lived in Buffalo for many years when Jerry and I were 1st married. When you live in Buffalo you spend a lot of time taking your guests to see Niagara Falls. I never have tired of visiting the falls, ever. Sadly enough the Canadian side is the most beautiful. And Niagara On The Lake, oh my gosh, I LOVE that spot. I hope you found time to have a real high tea!
Sunday, August 03, 2008 11:36:00 PM

Nanette Merrill said…
We took our family there a few years ago. The falls made me nervous and I got vertigo. I guess I'm a baby. But I'm so glad my kids could experience the vastness of the falls.
Tuesday, August 05, 2008 8:43:00 PM