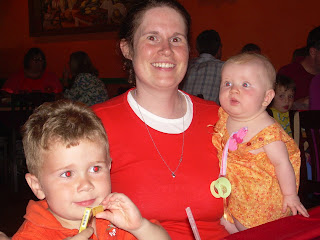 Sherry and her family decided to do a short summer vacation in D.C., and since part of their trip fell during a weekend, Joe and I decided to go down, too. They were staying at a hotel, but we stayed with Andrew and Amy.

We left in the middle of the afternoon on Friday and met A&A at the Old Ebbitt Grill near the White House. Andrew told us it was a landmark kind of a place and we really should experience it. Was he ever right! Not only was the place attractive and the mojito extraordinary, the food was delicious and abundant. Our waitress was spectacular -- she got bonus points for never once calling us "guys."

After dinner we walked over to the Reagan Theatre to see the Capitol Steps. And we laughed and laughed.

The next morning S2C2 arrived and after a period of visiting at A&A's place, we headed out to The National Building Museum, hand-picked by A&A as a place we all would like. And they were so right! We had a splendid time there. Sam was dazzled by riding on the Metro, helping to build a 7 foot arch, and identifying landmarks at the model of the city. The rest of us loved the Eero Saarinen exhibit and enjoyed so much more. 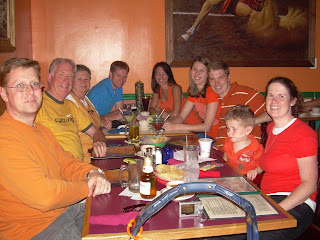 After a nap back at A&A's, we changed for dinner. Since it was the weekend before Andrew's 30th birthday, we decided to go out to an excellent Mexican place, and Andrew's good friends Meg and Ben were able to join us. His favorite color is orange, which the rest of us find a bit odd, and Sherry had the scathingly brilliant idea that everyone should wear that color in his honor! With them coming from their hotel and meeting us at the restaurant, Andrew would not really know what was happening until all were assembled. I had brought my infamous marigold orange jumper and Joe hid his new orange T-shirt under a buttoned up plaid shirt. We got to the restaurant and there were M&B at the bar; Andrew noticed that they were wearing orange and it began to come together for him. After S2C2 showed up, Joe unbuttoned and revealed his true colors. It was a lot of fun, especially listening to the passer-by, "Look, Mom, all of those people are wearing orange!" We all went back home afterwards, where Amy had made a yummy chocolate cake with white icing! A perfect ending to a lovely day. 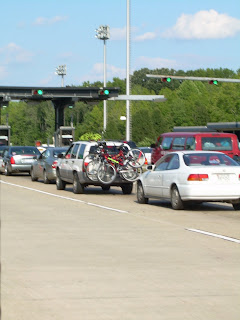 The ride home was long due to some traffic congestion which happened about four times, although we never came to a complete stop. The trip was uneventful, although we did note a car that had a lot of bananas on the roof and thought that odd and interesting enough for a photo op.

Tanya said…
What great fun and I love the idea of surprising Andrew with everyone in orange! And you look lovely too Nancy. One of the few pictures of yourself shown on your blog.
Monday, August 18, 2008 4:16:00 AM

Teresa said…
Thanks for the information. My husband and I will be in DC in October and will have to check out a Ebbitts Grill and Capitol Steps. Its funny, we both lived in DC for over 2 years - met there, and married in Arlington, and I had not heard of Ebbitts Grill. Looks like you all had a great time.
Monday, August 18, 2008 6:26:00 AM

*karendianne. said…
Orange is a favorite color of mine and I love bananas but I'm not sure what to think about them on top of the car.

Mrs. Goodneedle said…
Our daughter's fave color is orange, too; but then... she's an Auburn Grad. so she's excused. Ha!! What fun you all had! I would have guessed that traffic pic was in Puerto Rico, banana toppers are not an uncommon sight there..
Tuesday, August 19, 2008 7:28:00 AM

The Naturalist's Daughter said…
The little outfit looks wonderful on. Love the Orange surprise. Its a great photo, everyone looks happy. Glad you had a good trip. You don't get to see banana's on the roof a car everyday, what a novelty!
Tuesday, August 19, 2008 8:54:00 AM

Jeanne said…
Love the orange! If you add navy blue you'd have my Detroit Tigers' colors. *s* I love The Capitol Steps.
We've seen them a few times. It's amazing how they come up with just the right song for whatever person or story they are telling.
Friday, September 05, 2008 10:48:00 AM