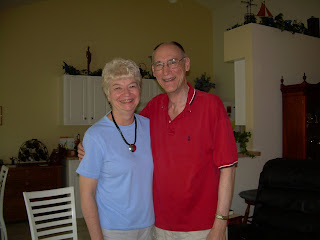 Our vacation was only a week and a half long, but it seemed longer because it was nicely divided into three distinct phases. Phase One was Blatant Fun at Niagara Falls, and I've written about that already. I had been prepared to be awed at the scope of the place, but I had no idea we were going to laugh and tease so much and enjoy the company of total strangers, some of whom didn't speak our language. But that is what happened at the Falls, especially at the Cave of the Winds.

Phase Two was Relaxation, Recreation, and Reflection at Chautauqua. We pursued all three with intensity. Joe sailed Windspirit several times, we each enjoyed the class we took, we loved the symphony concerts, and we did a bit of serious talking about the early part of the summer.

Phase Three was only two days long. This was Friends and Family. Pictured above and to the left are Lloyd and Roberta, long-time friends from Ohio. Lloyd baptized all of our children, and Roberta and I were charter members of the first book group I ever belonged to. They stayed in Ohio while we moved first to Chicago, then back to Ohio, and finally to Near Philadelphia. Lloyd's health doesn't permit them to travel a lot, and we were delighted when they offered us hospitality for a night before we drove back home. Roberta fixed such delectable fare for us; you would think she had trained at a B&B. We so enjoyed our time with them. 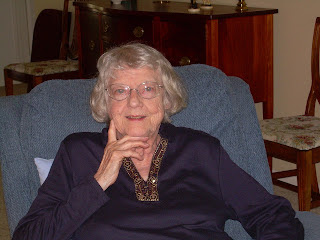 Between Chautauqua and Kent, however, we stopped at Kat's place to pick up "What Was I Thinking" and the "Batik Baskets" quilts. I didn't get a picture there, darn it. The quilts are fantastic; I swear the woman is an artistic genius. They are on the list for binding. Very soon.

Pictured to the left is Guenveur, another long-time friend from our time in Kent. We had wanted to have lunch with her before going to Lloyd's, but it didn't work out according to our travel schedule. Roberta was good enough to invite her to come to breakfast on Sunday, and she is much the same as ever. It was wonderful to be together, though a very large portion of the conversation for all five of us had to do with various physical conditions! A normal part of the aging process, I suppose.

Finally -- and, again, I didn't get a photo -- two-thirds of the way across Pennsylvania, we stopped in Bloomsburg and met Joe's brother and his family for dinner. Bob, Pat and Dave, had rented a cabin at a state park and had only just arrived a day or two before. But they interruped their vacation to drive down to town to meet up with us. We had a delicious meal and pleasant conversation. Dave has grown up so tall and handsome, and Pat was happy to tell about her new job which is much more in tune with her skills and gifts than what she was doing previously.

We arrived home close to midnight on Sunday, to be greeted by a very suspicious Bodacious, who warmed up quite quickly.

LoieJ said…
It all sounds so wonderful. My husband has always had to work hard and then he vacations hard. I call them type A vacations. I just want to sit and look at a lake. But we squeeze a lot in a short amount of time. And unfortunately, because he changed jobs three years ago, vacation time is at a premium.
Tuesday, August 05, 2008 6:48:00 PM

Tanya said…
I'm glad you had a wonderful trip and got to see all sorts of places and things. But I would guess that the best is being able to meet up with old friends and sit and chat together.
Now you have to relax from your relaxation!
Wednesday, August 06, 2008 6:26:00 PM

Guenveur in Kent said…
I don't rememberf talking too much about physical conditions, other than my sore ribs, about which I did devote an entire blog the next day. It was great to see you and to see Joe looking so fine and healthy. My ribs are better. (That sounds as if I'm bragging abaout my barbebcue, dunnit?)
Saturday, August 09, 2008 6:27:00 PM

*karendianne. said…
This was fun to read. "Blatant Fun..." and all.