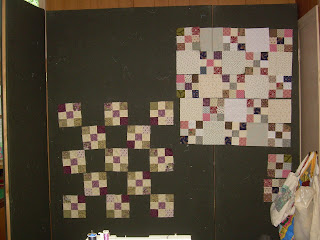 With the Sewing Olympics, much like the Beijing Olympics, there is often not much time between events. What did they say last night -- that Michael Phelps had 24 minutes between one event and the next? Sheesh. That's not even enough time to savor one's medal! Though I guess that has become commonplace for our man at the pool.

So, having finished the gold, i.e., Meadowbrook Pasture, for the binding event (podium pics to follow as part of the Closing Ceremonies, I imagine), I moved on to the next event. While on vacation, one night I awoke from a deep sleep with a vision of a super scrappy Irish Chain made out of CW left-overs from Meadowbrook Pasture. I got it started and was even putting rows together when all at once I thought of another one, to be made from left-overs from WWIT? and not quite as scrappy. And, of course, that notion would not sit still until I'd done some cutting. Which led to some stitching.

Here are pics of the dueling Irish Chains baby quilts. The scrappy one on the right seems to be ahead (thinking of Misty May) but it isn't over 'til it's over.

Everything is going on hold for a couple of days. We're leaving in two hours for a weekend in DC with S2C2 and A&A and on Monday I have an administrative retreat that lasts into Tuesday afternoon. So my next step is to get Bernina packed up; she's going into the shop for a tune-up while I'm otherwise occupied, and then it will be onto tracing more of the "Living the Dream" stitcheries to take along to stitch during odd moments in DC and at the retreat.

Don't even have time for a warm-up!

Mrs. Goodneedle said…
Keep those muscles warmed up and limber between events... these are both great and sure to be right up there on the medals podium.
Sunday, August 17, 2008 7:04:00 PM

The Naturalist's Daughter said…
Love them both. They will look fantastic. Certainly medal contenders. Speaking of medals Michael Phelps has done a phenomenal job in the pool. Congrats.
Tuesday, August 19, 2008 8:45:00 AM