Back to Business as Usual 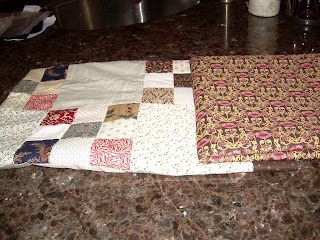 Two of my cyberbuddies, Kat and Lori who both live afar, came to Pennsylvania to attend what used to be called The Fort Washington Quilt Show until a few years ago when the Fort Washington Expo Center was sold and the show moved to Harrisburg. It's a Mancuso production, one that I always enjoyed attending because Fort Washington is literally seven minutes from Near Philadelphia. Because it always is held during the first week of school, I've not been able to attend since it moved.

Kat from Northeastern Ohio and Lori from Oregon came, though, and didn't have a lot good to say about it other than the vendors. They said there were a lot of art quilts and they, like me, prefer bed quilts. Since they'd come as far as Harrisburg they decided to extend their little excursion and spend a couple of days in Lancaster. Which is where I came into the picture. I had no major plans for today other than household drudgery and thought it would be great to drive out and meet them for lunch in Intercourse. I know Kat from her doing some of my machine quilting and from other times we've gotten together. Lori I've "known" on line, liked and admired from afar, for prolly eight years. I was tickled to have the opportunity to meet her in person. She did not disappoint. I forgot to take my camera, darn it. 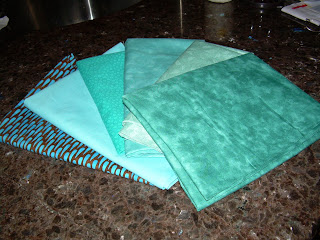 I did take my shopping list, though, and at the top of it was a Civil War border fabric. During my vacation this summer, one night I awoke with a vision of CW 9-patches made into Irish chain quilts and am now working on the third one. They are all baby size quilts and I'm having a fine time with them. I found a most agreeable border fabric at the Old Country Store.

Turbo and I are involved in a block swap where we are making brown and aqua-or-teal stars on cream backgrounds. She's apparently had trouble finding aqua-or-teal locally and asked me if I saw some to pick them up for her. What fun! I found some, as you can see, three for each of us. I think we both have plenty of browns. We each have to make 22 stars. I'd best get started. 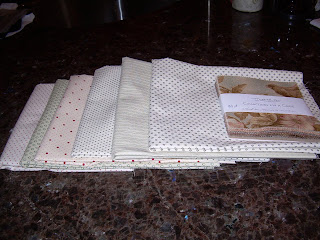 All of this Civil Warring has taken a toll on my shirtings, of which I never did have very many. I needed some and couldn't find any at either Log Cabin Quilt Shop (which has moved into the location where that place that had the amazing green rulers used to be, and is just the most delightful place) or at Old Country Store. So we trudged over to Zook's and behold! They had ample to select from and so I did.

I say trudge because today was a serious weather sort of day. I have lost track of whether it is a postlude to Hurricane Gustav or the prelude to Hurricane Hanna but it has rained and rained and rained. My drive home was a little bit unnerving as the rain was coming down in sheets, imperiling visibility. Initially I'd planned to stop at Sauder's but since I'd found everything that was on my list (and then some), I didn't.

Fortunately there wasn't a lot of traffic on the turnpike, and I got home safely, taking just a little bit longer than I normally would have. But I realized as I pulled into the driveway that my hands were aching from clenching the wheel for so long. Not fun. I took a major nap with Bodacious and after I'd been up for about an hour Joe suggested we go down to the Pub and get a sandwich. Which we did. 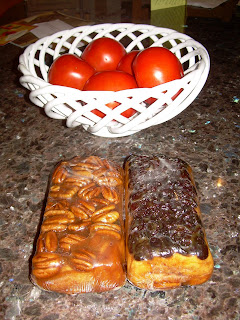 I had left home leaving plenty of time to meet up with Lori and Kat at the appointed hour, and got to Bird-In-Hand earlier than I'd anticipated. So I went into the big farmer's market there and bought some Amish sticky buns to bring home. Couldn't decide between the pecan or the raisin, and fortunately they had them in large size and small size, so I didn't have to choose, and I brought home one of each. Sherry and the kids are coming to eat brunch tomorrow. We'll see what Sam thinks about sticky buns!

And I couldn't resist the tomatoes. Aren't they gorgeous?

Up there on the picture of the shirtings, you may have noticed a little charm pack that I didn't mention. I saw it at Old Country Store and thought it might make a nice give-away. So, to all of you readers who have borne with me during my recent political digression, please accept this peace offering. Leave a comment, and on Thursday, September 11, Tom's birthday, I'll draw a name and send the charm pack off to the winner. It's Moda's "Collections for a Cause."

And now I really have to get that border made.

JoAnn ( Scene Through My Eyes) said…
I've enjoyed reading your blog for sometime now - I am always excited when it shows up on my bloglines. I love the fabrics - I made a reproduction of a family quilt using civil war repro fabrics a few years back - the original was made by my husband's great aunts and it was fun trying to find fabrics that looked about the same.

Bobbie Bentneedle said…
Looks like a good time was had by all. I love seeing what ya'll refer to as "shirtings" because it's not so common to see them called that at the local fabric stores here, and I have trouble getting to the LQS when they are open. It's that commute thing - gets in the way of lots of things.

Things are looking up, here "near Houston" - Dad got to come home from the hospital today, and I was looking forward to a day of sewing tomorrow... but my sweetie found a cabinet on Craig's list that he thinks is a 'must have' for my "fabric dungeon" - so I envision more organizing than sewing for a weekend or two - then "Look Out, Mabel!"
Saturday, September 06, 2008 9:33:00 PM

floribunda said…
I was thinking about you this afternoon when the weather channel talked about tornado watches "near Philadelphia" -- so I'm glad you made it home safely. All that fabric looks yummy, but if you pull my name, can I have a sticky bun instead?
Saturday, September 06, 2008 9:37:00 PM

Kookaburra said…
I have recently found your blog and enjoy regular reading as I have family also near Philadelphia. I have only had one trip to Lancaster and loved it. Hope to fly across the pond and do it again in the very near future. Cheers from Australia.
Sunday, September 07, 2008 12:10:00 AM

Linda said…
MMmmmmmmm, sticky buns. I had to stop making them--but I still love them! Put me in the draw please!
Linda (no blog)
stoleequilts@gmail.com
Sunday, September 07, 2008 12:13:00 AM

Karrin Hurd said…
I have had the pleasure of meeting both Kat and Lori, and they are great ladies! The tomatoes look wonderful!
Sunday, September 07, 2008 7:34:00 AM

Gretchen said…
Loved hearing about your shopping trips. Your Civil War quilt is going to be great--love the border fabric. Have a sticky bun for me please :)
Sunday, September 07, 2008 2:01:00 PM

Liz said…
looks like you had a nice visit with your 'net friends - reminded me of my one visit to Intercourse 9 yrs ago to meet some on line quilt friends in person. I remember those shops and that lovely market where you shopped. Now I am longing to return to that area. Love your blog, my buddy Bobbie pointed me in your direction.
Sunday, September 07, 2008 3:50:00 PM

Debi said…
Great fabrics and I love our blog. I am inviting you to participate in a Fall into Fall Quilters Blog giveaway that I am hosting. Come on over and check it out.
Monday, September 08, 2008 10:47:00 AM

Perry said…
Those sticky buns are making me hungry. You can find shirtings at Marsha McCloskey's web site too. Don't know the url but just type the info into Google and it will give it to you. She has some good ones. Everyone is intitled to their own opinion on their politics and I have enjoyed your view. My girl grandkids go to a private school and I am glad they can because they are getting a better education than in our public schools, which is a shame. My daughter is making sacrifices to send them there, and I think a lot of other parents are doing the same thing.
Thursday, September 11, 2008 3:10:00 AM