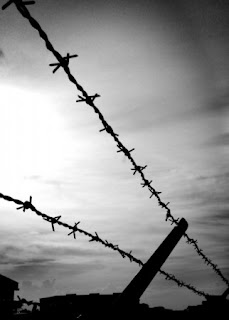 There was a wee bit of a buzz on campus this morning. One of the teachers has a sister who works for Katie Couric. Said sister had inquired as to whether one of Katie's correspondents could come to the school later today and interview a group of women who are Still Undecided.

I wondered if anyone would show up.

Turns out the correspondent was directed elsewhere, so I'll never know.

But this raised a question that had not occurred to me until now: How can anyone be Undecided?

Either you want to see Roe v. Wade torn down, or you don't.

Either you want a war monger in the White House, or you don't.

Either you want a President who picked his running mate knowing that her acceptance would out her daughter's personal life to the world, or you don't.

Either you want to give the wealthy tax breaks that burden the not-so-wealthy, or you don't.

Either you want a President who selected a knowledgeable Vice President, or you don't.

Either you are terrified of a McCain/Palin win, or you're not.

Can't believe anyone is still on the fence. Take a look at it. It's a terrible place to be.

Three Birds Inspired said…
If you were not afraid before, a dear friend sent me this link:

LoieJ said…
We DO want somebody who speaks well, but we sure want more than that!

Nann said…
At our quilt guild potluck last week the woman across from me said glowingly, "With all the things Sarah Palin has done, imagine how many votes she'd get if she were a quilter!"

I said, "Not my vote!" and changed the subject.