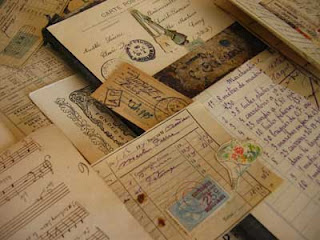 The other night Joe opened a box from our last move in 1999. It may be the last of such, but one never knows. As it turns out, this particular box was from the previous move, in 1980. I'd begun to think that if we haven't needed whatever was in the box in nine years, we could just toss it without opening it. I don't know what my thoughts would have been if I'd realized it was twenty-eight years since it had been packed!

We found all manner of things in the box, including a high school yearbook, my high school charm bracelet and class ring. We found a stack of birth announcements with ducks from when Tom was born and bears from when Andrew was born. The Raggedy Anne ones weren't there, though. There was a stack of greeting cards sent by well-wishers on the occasion of Tom's birth, and we read through them and wondered who some of these people had been! Roberta Heckler's name sounds somewhat familiar, but I've no idea why!

Back when the kids were very little, I was heavily involved in the La Leche League, and as a fortunate stay-at-home mom, I was able to pursue leadership in that organization. Among the papers was a folder containing my application for the leadership program, including a brief autobiography. I set that aside, thinking one of the girls might like to read it someday. When we lived in Ohio, I was the editor of the newsletter that went out each month to all the subscribers of the La Leche League news, and there were one or two copies of each of these newsletters. I thought Sherry might like to take a look at them. Folded up in a strange piece of paper was a lock of golden hair from Tom's first haircut that I thought I'd give to Anastasia, remembering when Joe's mother gave me a similar item. It was fun digging through and looking at these things. There was a small collection of Indian Head pennies that belonged to my parents. A letter from my old friend Oddery.

We had a good time digging through the box. And then I found a journal that I'd written as a requirement for an English class I was taking in the spring of 1970. I set it aside, and last night I read through it. My first thought was, "What if someone else were to get ahold of this!" I was absolutely shocked at how self-centered I was in my early twenties. Arrogant, too. Perhaps it wasn't a bad thing that I found it; reading it gave me the opportunity to see that I have, in fact, grown in many important ways. But, quite honestly, I did not find a whole lot to like in who I was thirty-seven years ago.

Teresa said…
Talk about a walk down memory lane. I think you are probably being too hard on yourself about your journal. Remember, a journal is a time to express your inner feelings that a lot of time you would never express or act upon. How fun to find all these treasures.
Monday, September 08, 2008 7:31:00 PM

quiltmom anna said…
Nancy,
What a great box to find and go through and remember.We all change and grow in different ways- I am sure you are being hard on yourself- It is apparent from your blog that you are kind caring lady who has a strong values and sense of self.You continue to work hard for the things that you believe in and are devoted to your family. Those things would have existed as a younger woman. Some times the day to day demands of life overwhelm us- Life takes us on many interesting journeys- may you continue to enjoy a journey that is rich with the love and laughter of loved ones.
Regards from a Western Canadian Quilter,
Anna
Tuesday, September 09, 2008 1:30:00 AM

Anonymous said…
Good thing you didn't throw the box out without opening it. =) I imagine that the people your friends were then would still have liked you. We were all young and self-centered then, too. =)
Tuesday, September 09, 2008 3:02:00 PM

Tanya said…
Old papers, oh no! A few years ago I came across my box of papers from college including a senior thesis. YUCK! What a high-tooting, snobby collegiate I was! I dumped the whole thing! I DID NOT want my kids to someday come upon this and see that mom could be so self centered! Lots of big words and no content! That was 30 years ago. I wonder what I'll think when I read my blog 30 years hence... Scary!
Friday, September 12, 2008 4:49:00 AM