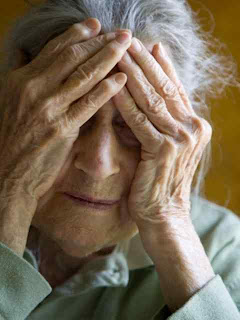 One day Honna mailed me an article about senile dementia. She'd found it interesting and thought I might, too. She was right. I phoned her right away.

"I got the senility article," I told her.

"What senility article?" she replied.

We thought the exchange was hilarious.

It took place thirty years ago.

Since then, each of us has lost her mother to Alzheimer's dementia. Far from hilarious, for us (and for me more than for her), forgetting anything at all has become concerning. We know that everyone forgets things and we know that this increases with age. We know this. And yet we wonder, "Is this how it starts? Has it begun to happen to me?"

So it was with tremendous courage last night that I watched a movie called "Away From Her." Joe and I had seen previews of it when it was in the theatres, but it got away from us (no, we didn't forget to go), so we put it on the Netflix queue. I was afraid it would upset me. It did. But not in the way I anticipated.

What a disappointing and unrealistic film! Let me list my complaints:

...The idea that an educated and intelligent person with Alzheimer's would deliberately choose to move away from her home of many, many years and into an unfamiliar place, away from the anchor of family. Ludicrous.
...The care facility's policy that no one, NO ONE, can visit the patient for the first thirty days. This radically contradicts good practice, where the importance of familial connections is stressed.
...The notion that the patient would lose her long-term memory, i.e., of her husband, that quickly and yet preserve her short-term memory, i.e., of her new attachment. Again and again the sick woman was shown with the recent past intact and detailed while the distant past was expunged. People with this disease remember the past as though it were yesterday and remember yesterday not at all.
...The unfailing gentility of the patient -- there was no evidence of frustration early on, and no indication of intense mood swings later on.
Oy.
Though the film received overwhelmingly good reviews, one writer spoke of it as a "Hallmark card" about Alzheimer's. So right on.

Wendy said…
I totally agree with you. My grandmother had the Alzheimer's disease. She first became irrational and annoyed at things she didn't understand. Then she would call my mom (her daughter) quite a few times confused by her surroundings. My mom would redirect her to the clock on the desk next to my grandma's phone. The clock belonged to my grandma's mother. Her long term memory of my mom (and her phone number), her own mother, her mother's clock all helped to stable her emotions. All the while she was forgetting her husband (of 14 years) and her home (of even less). As a matter of fact, she had 4 husbands in her life and she kept calling her last one by the 2nd ones name. My mom (her only born child) was the last person she forgot. She passed at my mom's home in 2001. I miss her lots!!!
God bless you,
Wendy
Thursday, September 18, 2008 1:01:00 PM

*karendianne. said…
Let me just say I understand "Hallmark Card about..." They do that with photos of MS all the time. As if to say Don't let 'em know the real deal, don't scare 'em. and they follow those up with little "happily ever after" stories.

Mrs. Goodneedle said…
I haven't seen the film you mention and haven't had a family member diagnosed with the dread disease, but I've seen it up close in visits made to church members and relatives of the same. There's nothing to gloss over and feel good about, that's the plain and simple truth.
Friday, September 19, 2008 8:49:00 AM

alobsiger said…
I was puzzled by that film after losing my grandma to dementia several months earlier. It struck me as ridiculous from the beginning of the film and I didn't like it any better by the end. Your post summed up my feelings about this film.
Friday, September 19, 2008 8:52:00 AM

Guenveur in Kent said…
My sentiments exactly, with the added ridiculous touch of having her hair all messy to indicate her failing mental state. Julie Christy, for god's sake, with messy hair!. I could not believe it was so lauded. I have no experience with Alzheimer's, but even I knew that keeping family away was so unrealistic as to make the whole premise of the movie contrived and stupid. Of course it also gave the movie a plot with a conflict. But really!
Yesterday I stopped at a drive through to get a drink and completely ignored the ordering kiosky thing first and wondered why the girl at the window looked so confused when I zoomed up and ordered a coke. Since I am an old party, I think she was convinced that I was probably on the way downhill. Actually I was just listening to NPR and was preoccupied with the whole financial mess we're in right now. Talk about "Oy!"
Friday, September 19, 2008 8:37:00 PM

Leslie said…
I don't enjoy Hallmark movies for all the reasons you listed. They seem to be trite or trival. Have you seen Judi Dench in "Iris". Read about it here. http://www.imdb.com/title/tt0280778

It was a great performance by a terific actress. But that didn't make the protrayal any less heart wrenching.
Tuesday, October 07, 2008 3:47:00 PM