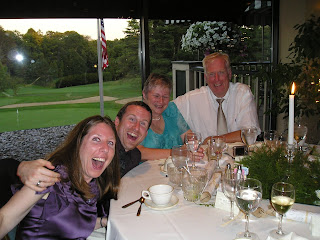 My great nephew was married yesterday afternoon to a lovely young woman he's dated since -- I think -- his freshman year in college. He'd graduated this past June. How could it be that Susan's son was getting married? I remember her wedding as though it was last summer; we had three little kids and we asked someone to take a picture of us because it was a rare occasion that we were all five clean and well-dressed at the same time. I remember, too, when a few years later Susan asked me, "How would you like to be a great aunt? Not that you aren't a great aunt already!" and thus the impending arrival of Scott was announced.

He's grown into a poised and handsome young man with a sweet and beautiful wife. His younger brother Ben, a college freshman himself, served as best man and his darling girlfriend was very much on the scene. Younger sister Kristen looking exquisite as a bridesmaid in delicate green.

All six of our kids, plus Caroline (Sam having been claimed by his paternal grandparents for the afternoon) were in attendance and we had a table to ourselves. It was wonderful to be together. Afterwards, even though Mt. Joy, Pennsylvania, is only about 90 minutes from Near Philadelphia and we might well have driven home in the evening, since our Virginia folks were staying over, Joe and I decided we would, too. We spent the night at a really good B&B right in the town where Susan lives and were treated to a yummy breakfast this morning. And then we all headed to our respective homes, not to reconnect for several months.

This photo shows Anastasia and Tom and Joe and me clean and nicely dressed at the same time. You'll need to trust me that the other five were, too.