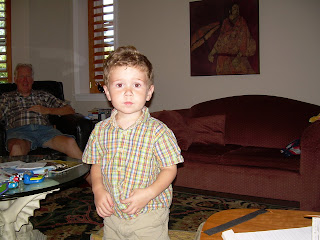 Joe had phoned Sherry on Friday to see if we might spend some time together this weekend. She reported that Chris had tickets to go to the Eagles game so she and the children would come see us on Sunday.

They arrived about one-third of the way through church. It had been a long time since they'd visited our church and it was fun afterwards to show them off and receive compliments!

We came home and had brunch on the deck and a long, satisfying visit. Sam and Joe spent a great deal of time outside looking for chipmunk holes and stacking logs. They came in then, both pretty tired. This is an uncharacteristically serious picture of the little guy. 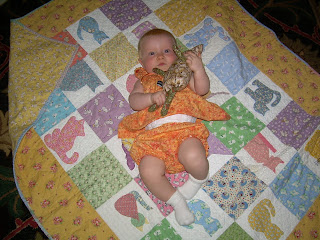 Here's Carrie, in the dress I'd made for her, quite smitten with the Owlie that Tatania sent. Those long legs are so chewable!

She's been in day care for a week now, and Sherry says she's doing very well with it. Sam's in a different class, of course, but comes over to see her when they are outside on the playground at the same time.

She's the most amiable baby -- just like her mother was.

Ms. Jan said…
The kids are cuter than ever Nancy. Sam reminds me of the famous Hiram at that age and Caroline is a doll. That yellow fabric to the left of her head is the backing of my Benjamin's quilt. Sweet memories.
xoxo
Sunday, September 07, 2008 7:05:00 PM

Teresa said…
Grandbabies are just the best there is and yours are so cute. glad you got to spend some time with them.
Monday, September 08, 2008 6:29:00 AM

Mrs. Goodneedle said…
Precious, precious children! I remember seeing Sam napping on that same quilt not that long ago. Life is just FANTASTIC!
Monday, September 08, 2008 8:03:00 AM

Anonymous said…
Adorable, of course. When she gets a little hair, ask me for the etsy site where the mom makes the hairbows for Kiley.
Tuesday, September 09, 2008 3:10:00 PM