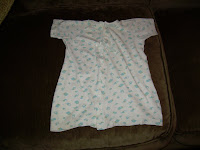 Today my sister was lovely enough to host a baby shower for one of my two pregnant daughters-in-law. This one was for my older son's wife. To the left is a picture of what I gave her.

You probably are thinking that it doesn't look very new. And you are right. I picked it up in 1968 at the PX when we'd been married a year and believed that we wouldn't be able to have children (not that we could have afforded any then, anyway). I bought it and hid it away in my underwear drawer until September of 1974 when I brought it out for Tom to wear home from the hospital. He and two other babies wore it and I packed it away again, not quite sure why. I found it in the attic a few weeks ago and thought Someone Else might get some wear out of it. 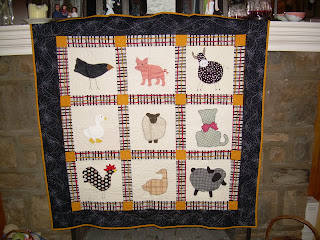 I also gave this quilt to the expectant mom. I love these happy animals who were part of a farm block swap. I made the crow and the rooster and the sheep in the middle. I believe Karrin made the pig and Desertsky the cow. I don't know about the others. This swap was pretty many years ago and yielded one or two other baby quilts. I was partial to this one and -- again -- packed it away for someday. I made other quilts for Sammy and Carrie when they were born and I imagine I'll make plenty more grandchild quilts.

But this one, I thought, was just right for the child of the quirky guy who wore the blue and white kimono, a baby we are so looking forward to meeting on or about April 10!

AnnieO said…
Oh, happy day when packed away treasures find new homes. Thanks for sharing your sweet story and joy. The quilt is adorable and fun, great for baby, toddler, or youngster of any age...
Saturday, November 28, 2009 5:42:00 PM

Unknown said…
How lovely that it is being passed down to a grandchild, and the animal quilt is adorable. Babies bring joy to parents, grandparents, and in my case great-grandparents (just got a new little boy great-granchild in Oct.
BarbM
Saturday, November 28, 2009 7:16:00 PM

Gari in AL said…
I love your quilt and especially since it is from an old swap. I am giving a quilt at Christmas that the blocks came from someone else's swap. One just never knows when those blocks will come in handy, do they?
Saturday, November 28, 2009 7:55:00 PM

Guenveur in Kent said…
I find it amazing that there are no spit up stains on this thing, after three babies have worn it. Oxy-Kleen, or babies who retained their food constantly? MIne ususally had tghat awdul yellow vitamin stains on them.
How lovely to have someting this pristine and family related. And the quilt is just charming.
Saturday, December 05, 2009 10:40:00 AM