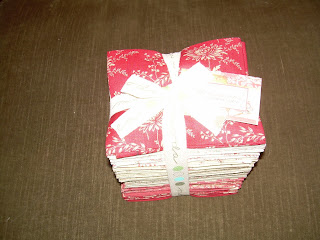 Yes. It is Rouenneries, and yes it is mine.

It's been months since we got our initial glimpse of this line of fabric. I remember that first peek and I remember thinking the fabric was utterly gorgeous. I still think it is.

And at the same time, I'm aware that I've succumbed to the media. Our appetite for this fabric has been teased and whetted consistently since that first appearance. Some fortunate folks somehow got advance packets of it and showed what they'd made on their blogs. Others designed patterns based on it. On-line shops tantalized us by promising it would be in their shops and -- consequently -- in our hands in October. Scarcely a week went by in all of those months without a reminder somewhere: Rouenneries is coming and you need it.

And then all at once, no sooner had October arrived, but the major suppliers, i.e., Hancocks and Fat Quarter Shop were already sold out. Apparently a very limited supply of the FQ packs was produced. Or somebody is hoarding them a la Cabbage Patch dolls, hoping to make a killing.

I've said it before and I'll say it again: I almost never buy fabric without a plan for it. William Morris, as you well know, is the major exception.

This Rouenneries was here in the mail when I got home today. It is gorgeous. To swoon over.

Simultaneously, though, I feel that I've somehow gotten caught up in the media/marketing frenzy around this line.

And for me, that's not what quilting is about.

The Calico Cat said…
So what are you going to do with it? Mine is 3/4 of the way to being a top! (But I got 5 charm packs & yardage not a FQ tower.) You can see what I started on my blog - I posted my early sewing on monday.

Quiltdivajulie said…
Oh, my ~ do I EVER understand your relationship with the General ... I fell hook line and sinker for the hype and promotion of Moda's Posh line a while back ... ended up making a large quilt, a lap quilt, and a small scrappy lap quilt (2 of the 3 were gifted) ... and boy, did I ever feel like I had been pulled in by that frenzy. Beautiful fabrics but ...
Tuesday, November 03, 2009 5:52:00 PM

Miriam said…
I have a jelly roll and layer cake of Rouenneries and they will be used in a quilt I am taking a class for next week. I can't wait to start!!
Wednesday, November 04, 2009 4:03:00 AM

blueberrylane said…
I have a fat 1/4 pack sitting here and the exact same thoughts passed through my mind... Moda definitely know how to market something !
Friday, November 06, 2009 6:24:00 PM