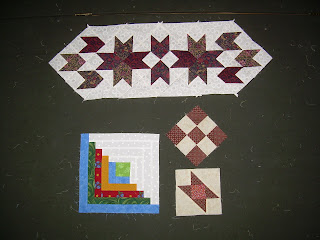 According to family legend, some matriarch reportedly said, "If you sew on Sunday, you'll pull every stitch out with your nose!" I've no idea just how this would be done, but it sure isn't a pretty picture, now is it? Oh, those old-time Methodist rules and regulations!

I spent most of Saturday cleaning and organizing my sewing studio. It was quite the mess and as of now, it is a real pleasure to be in. Once I got it pretty close to the way it should be (there are still a couple of baskets to be dealt with), I settled in to sew. And it continued on Sunday.

One of my monthly group mates, Marsha, sent the lime center square and the starry white and asked for a bright log cabin with the final layer being blue. Golly, this was fun to work on. I hope Marsha is pleased and I'll be eager to see her finished project -- I bet it will be stunning.

Another group mate, Anne, sent a brown CW print and asked for a 6" nine patch and a 6" pretty block. I was glad I had some CWs to draw from to fulfill her request.

Finally, Christmas is coming. I pieced a couple of table runners using William Morris scraps and a particularly fine WOW for gifts. The second one is on the wall there, and the first one is layered and pinned and is in the living room where it is about one-half hand-quilted. You should be able to click the picture to enlarge it and have the full benefit of that truly yummy white.

There's some peculiar satisfaction in finishing up these little mini projects. And now I'm off to sharpen my nose. Just in case.

Helen said…
My grandmother always said that phrase! I always loved to sew and she thought it was a sin to sew on Sunday!

floribunda said…
that IS a yummy white! Marsha sent me a different white (not stars) and Anne's fabric is completely different, too. Hard to believe we're in the same swap!
Tuesday, November 10, 2009 1:54:00 AM

Pat said…
Nancy, people are starting to talk about your affair with Bill. Does your husband know?

Seriously, that table runner is very nice & will make a lovely present. The Bill fabric is appropriate for Christmas, but doesn't scream holiday -- it would be handsome on a table almost any time. The white is stunning too. It's so nice to be able to get the WOW's that aren't just itsy flowers or bows. I used that star WOW for a quilt for my grandson. Please post pictures after you are finished hand quilting! I have not attempted that so far, but a runner might be a good item to start with.

I'll bet your sewing nest makes you smile every time you enter now. A good clean up every once in a while does wonders for the soul.
Tuesday, November 10, 2009 8:46:00 AM

Quiltdivajulie said…
Love the log cabin block and hope we get to see the 'controlled' scrappy quilt that results!