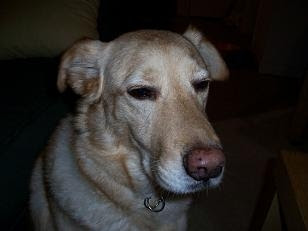 I don't know if I mentioned to y'all that while A&A are trying to sell their condo, the grandparents-to-be are earning points by keeping their dog. Zoe's been with us for a week and a half; tomorrow night we hand her over to the other "grandparents." To keep A&A from missing her too much, each morning I send a brief email report of how she's doing(just fine), what excitement she's found on her evening walks with Joe (deer, skunk, cat), and how her appetite is (superb).

This morning there was an experience to top them all. And I can't improve on the reporting. So here's my husband, in his own words:

This morning we were out looking to see what we could find. You know we have seen deer frequently; the other evening 5 and last night a single deer was silhouetted on the crest of the hill. So this morning we went to see if the deer were bedded down near a spot we found them on Saturday.

We when down the trail, through the edge of the park, over the small bridge, into the woods and turned left. We both stopped periodically and look while we listened. At this point in the walk Zoie stopped smelling other dogs and she knew what we were about. We moved forward to the spot but found nothing.

Well, it was a morning walk and I had to get to work. So we went back out of the woods, across the bridge and through the edge of the park. Shortly after we were back on the trail to [our street], a fox came down the hill and stopped on the trail about 75 yards in front of us. We both saw it and we just stood still. The fox sat scratched itself, looked around and walked the path toward us. It stopped again, scratched again and then came closer. Zoie and I were standing in a shadow of a tree, I had on a bright yellow jacket that blended into the tree, the wind was blowing across the trail so the fox didn't smell us, and the sun was bright into the fox's eyes so we were hard to see. The fox came closer; we were both frozen, I tightened the leash very slowly, and we waited. The fox trotted along checking out one side of the path then the other (the path is from six to eight feet wide in that section).

The fox was redder than others I have seen in the area Its tail was flattened and thin, not bushy, and darker red, with a white end of about five inches long. The still came toward us, we were frozen there for at least five minutes. At a distance of about 60 feet, half the width of our yard, the fox stopped. He just looked at us, he appeared to squint at us in the bright sun. He blinked his eyes and he looked, we didn't move.... Around his eyes there was darker hair and he watched us. After a while he moved back several steps and stopped to look at us again. Still Zoie didn't move. He walked back to the other side of the trail and looked back again. Then the fox hopped into the woods, Zoie jumped and pulled the choker collar was tight and she could hardly breathe but still she pulled! We moved up to the spot where the fox had gone and smelled and looked and, of course, pulled some more, but he was gone and we couldn't believe what had just happened.

I wonder where Zoie will want to walk tonight.

*karendianne. said…
What must the Fox have thought? Oh my I'm so interested in how Zoie reacted - or rather, held her ground and watched, waiting on that Midnight Fox. What intriguing coloring and tail on that little foxling, too!
Tuesday, November 17, 2009 1:10:00 PM

The Naturalist's Daughter said…
What an experience. It sounds wonderful to see animals just out on a walk. Zoe sounds amazingly well behaved. Thanks for sharing it.
Tuesday, November 17, 2009 3:12:00 PM

Tanya said…
Fox! How exciting! It sounds like Zoie was absorbing the delights of fox-sighting as much as your husband was.
Wednesday, November 18, 2009 7:32:00 PM