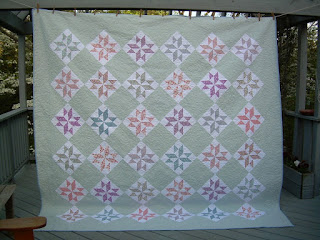 Some years back, Sally wrote to ask if I knew how to repair a quilt. Family and ancestors are important to Sally; she had a quilt from her late father's side of the family that she was interested in rejuvenating. Sadly, the quilt, in my opinion, was beyond even palliative care. There were large worn places, holes in the fabric. Clearly, this quilt had been well loved and well used.

This winter, while I was coping with my job loss news, Sally received painful news of her own. The house she had lived in for her entire adult life had been sold and she would have to find a new apartment to live in. In a college town, this can be an enormous challenge. Far from a person of means, it seemed that most of the choices available to Sally were in houses shared with students (not desirable for a woman in her fifties). She had several months notice of the impending change/loss, and she needed every single minute. I agonized as I read of her sadness and frustration on her FB posts.

Early into this time, Sally's brother wrote and asked if I would be willing to make a quilt for him to give to Sally. This isn't something I ordinarily do, but Sally's mom has been an important figure in my life, and sometimes for those important connections we do things we wouldn't normally do.

When John sent me a photo of what he was looking for, it turned out to be the same old threadbare and unusable quilt that Sally had cherished for so long. John wanted a quilt in that spirit, and he wanted it queen size. So I set to work. A big sale at Burkholder's helped with the cost, and encouragement from the White Oak crowd helped as I cut and pieced the seemingly endless blocks.

Today is moving day for Sally, and I just received word that the quilt had been gifted and that she was pleased. I'm sitting here grinning from ear to ear. What a nice thing to have been able to be a part of!

Anonymous said…
I have been following Sally's blog, through your linkup to it and was wondering if she had found a place. I hope that she likes it. That was very kind of you to make that quilt for her. Thanks for sharing.
cindy
Saturday, June 01, 2013 3:28:00 PM

Pat said…
Many of us have seen this quilt in progress, know how hard you have worked on it, and how it transitioned with you during a difficult time in you life. We quilters are very fortunate to have a gift that lets us show others in a very tangible and lasting way how much we care about them. This quilt was truly a gift from your heart, not just to Sally, but to her brother and to her mother. Nice job, Sister Nancy!
Sunday, June 02, 2013 7:34:00 AM

Barbara Anne said…
What a lovely quilt in happy colors, yet serene because of the beautiful shade of green fabric you chose for the alternate blocks and borders. Applause, applause!!

Your kindness as well as the quilt will be cherished by Sally for all of her years to come.

I had to look at those blocks with my head tilted so they were square to recognize them. Interesting change to put them on point!

LizA. said…
Smilin from this side of the country too...

antique quilter said…
this is just a great story thank you for sharing it with us. I know how happy you are now , it was wonderful for you to give your time and make this quilt
it was all worth it ...
Kathie
Monday, June 03, 2013 5:50:00 AM

Judi said…
What a gorgeous quilt, I am sure Sally was thrilled.

SallyB said…
Quilters all, I was so deeply moved by receiving this stunningly beautiful quilt that so strongly resembles the ancient one made by my paternal great-grandmother that I have loved for so very long. I cried when I received it, seriously, because it meant so much to me to have this amazing gift. It now has a place of honor on my bed as nights have been pleasantly cool enough to use it this summer. It looks amazing and gives my new bedroom a very traditional look that I love so very much.

The new apartment that I am still in the process of settling into is in a 112 year old house that has, well, a lot of, um, "character", if you know what I mean. Needs much work, a bit rough in places, but it met all of the criteria I had set down for what I wanted: walkability to downtown, Kent State and my mom's, in the same neighborhood in which I have spent my entire life, ample storage and affordability (well, I hope so, at least where the utilities are concerned, given this house's age and such!). Don't know how long I will live here, obviously not as long as my previous home where I had lived for close to 30 years and which was sadly razed a few weeks ago for a Dunkin' Donuts store being built there, but it will do for now, and the quilt makes my bedroom probably the most special room in the entire apartment. THANK YOU, Nancy, for this moving, special and beautiful quilt, especially given your own painful situation in the midst of all of this.
Saturday, June 29, 2013 7:55:00 PM