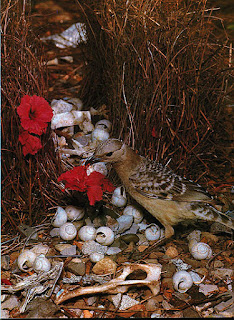 Each year on the weekend closest to Flag Day, our neighborhood holds yard sales. Some years there are a hundred or more. I got up early this morning to walk, and saw people setting up their displays. Old school desks were very big this year; at least three households that I passed had one or more. An older couple selling skis and snow shovels; I imagined they were moving to Florida. A wailing five-year-old who was apparently less eager to part with his Big Wheels than his mom was. A pair of bed-headed girls who had even more bed-headed Barbies on a table with some Star Wheels paraphernalia. And lamps -- oh my -- lamps galore, most of them hideous.

Of course, on a walk, the mind wanders and processes the sights. I was reminded of one of the two times we were involved in a yard sale, when a questionable-looking man furtively approached my husband and asked, "Ya got any knives? Guns? Swords? Embroidered samplers?" This was prolly thirty years ago and we still wonder what he was about (we had none of those items).

Then I got to noticing that the people approaching the tables were the serious shoppers with an intensity about them; they were the early birds hoping to find an original Grandma Moses painting among the collection shown by a naive seller. Never mind that the official start time for the sales wasn't until nine o'clock; at seven forty-five, they were out to make a killing.

I knew that at the peak of the sale, long about ten o'clock, the streets would be impassable due to drivers hoping to spot a bargain through the windshield and the sidewalk would be congested with more casual shoppers, and I was glad to be getting my walk out of the way. I had visions of all of those people from It's A Mad Mad Mad Mad World out hoping to be the first to find that great big W.

There was definitely something else that was familiar about the yard sale culture, but I was at a loss to pinpoint exactly what. Until I came down the home block and saw my neighbor had neatly folded athletic sweatshirts all lined up on a blanket on the grass.

Then I remembered a naturalist video we'd watched just this past week, where David Attenborough educated us on the peculiarities of the bower bird. And I chuckled.

Barbara Anne said…
As, yes, do we ever like STUFF! After clearing out my parent's home and my grandparent's home that my aunt had lived in, I have mostly lost my hunter-gatherer urge due to the mass of family stuff. That's not to say I don't have a weakness for glass paperweights ...!

Did you manage to resist buying anything?

Anonymous said…
After seeing the video, it sort of makes me ashamed of my own home. I really need to start clearing it out and doing some sort of decorating. Thanks for sharing.
cindy
Saturday, June 15, 2013 11:41:00 AM

Janet O. said…
What a wonderful comparison. I loved seeing the video of the bird arranging things in his yard, to attract a female, and thinking about your neighbor arranging the shirts on a blanket to attract a buyer. : )
Saturday, June 15, 2013 12:51:00 PM