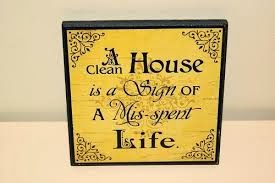 Someone I used to know said of her mother-in-law, "When she dies, her gravestone is going to say 'She Kept Her House Clean.'"

Neither of us ever aspired to be her mother-in-law.

I first encountered the sentiment to the left a bazillion years ago when I was visiting my cousin. She had it hanging on her wall in 18-count Aida. I didn't give her a moment's peace until she shared her pattern with me. I finished the cross stitch in record time, had it framed promptly, and it has served as my motto ever since.

I also hired a cleaning lady. Who is wonderful. And is named Natasha. But that is another story.

Natasha keeps 92% of the house looking great! But she isn't allowed near my sewing space, not that she would even attempt to go there. She is very smart and has her limits.

As a sufferer of Multiple Project Disorder who swears by her motto, I function happily in my mess and clutter and disarray. Most of the time.

And then -- without warning -- the Dreaded Cleaning Virus will strike and I won't be able to sew a stitch until I have cleaned and purged and organized. My little friend Turbo lives for these outbreaks because she is usually the beneficiary of the cast-offs.

Wondering why I've been quiet since Saturday? Well, now you know. The first symptoms of the Virus appeared on Sunday and it took up all afternoon and all of Monday, the legitimate holiday (because Thursday and Friday were snow days. And now it is done.

The space is pristine. Turbo picked up a couple of bags of this-and-that. The Guild White Elephant Exchange received two great big parcels (and to my credit I picked the smallest thing I could find to bring home). Fabric is relatively neatly arranged in the metal cupboard on the shelves along with WISPs**. A list of the latter has been prepared and will be dealt with. Two projects that I've totally lost interest in but have a large dollar investment have been set aside and if they aren't taken care of by the next time the virus comes around, out they will go. Civil War is all in one place, as are Rowan and Batiks and the small remaining amount of Laurel Burch. Oh, it is glorious in its tidiness!

Let us see how long it lasts.

Janet O. said…
It is funny how we can putter along in our clutter thinking all is well and then suddenly it has to go or we can't function!
How lovely to be able to hire a cleaning lady! Would sure allow for more of what fills your plate!
All of my good intentions at staying organized don't last long enough, that is for sure. Hope you are more successful!
Wednesday, February 19, 2014 10:54:00 AM

Quiltdivajulie said…
THe virus struck at my house a week or so ago - the bins of 2.5" strips and the cool/warm resource boxes have been sorted, culled, and are now stored in groups based on their position around the color wheel. SO much better - but it feels good to be stitching again instead of sorting!
Wednesday, February 19, 2014 11:11:00 AM

Barbara Anne said…
Ah, but all of my "away" places are full and still stuff abounds. Some time in the not distant past I put up a rectangular folding table to support a large quilt I was putting together. Yesterday DH asked if the table had become a permanent fixture as it is covered with all manner of stuff and has boxes of more stuff underneath it end to end. Sigh!

The framed motto in my wee sewing room says "Creativity is Messy and I am Very creative!"

Cheers for your energy and all you accomplished!

Susan said…
I did a much more limited organization a couple of weeks ago. My goal was to remove all the UFOs from the top of my cutting table. Ni'm finding that I'm much more productive with a bigger space yo work on. Hope that conquering your virus helps you get more done, too.
Wednesday, February 19, 2014 6:48:00 PM

AnnieO said…
I wouldn't aspire to be that mother in law either! While I have a cleaning lady once a month, a Tuesday I relish, I could use a dose of the virus at the moment. Getting rid of old projects is a hard thing. Good for you on dealing with what was at hand and making plans to carry that on. The money investment thing is a difficult bear...
Thursday, February 20, 2014 12:55:00 AM

Nann said…
Get well soon.
I suppose I should ask you to give it to me.

"A place for everything and the more things in the place, the better," said a character in the children's novel The Gammage Cup. That resonated with me when I read it nearly 50 years ago and I still agree.
Thursday, February 20, 2014 7:39:00 AM

Millie said…
Oh holy hell! You may have just given me the phrase for my next word quilt!!