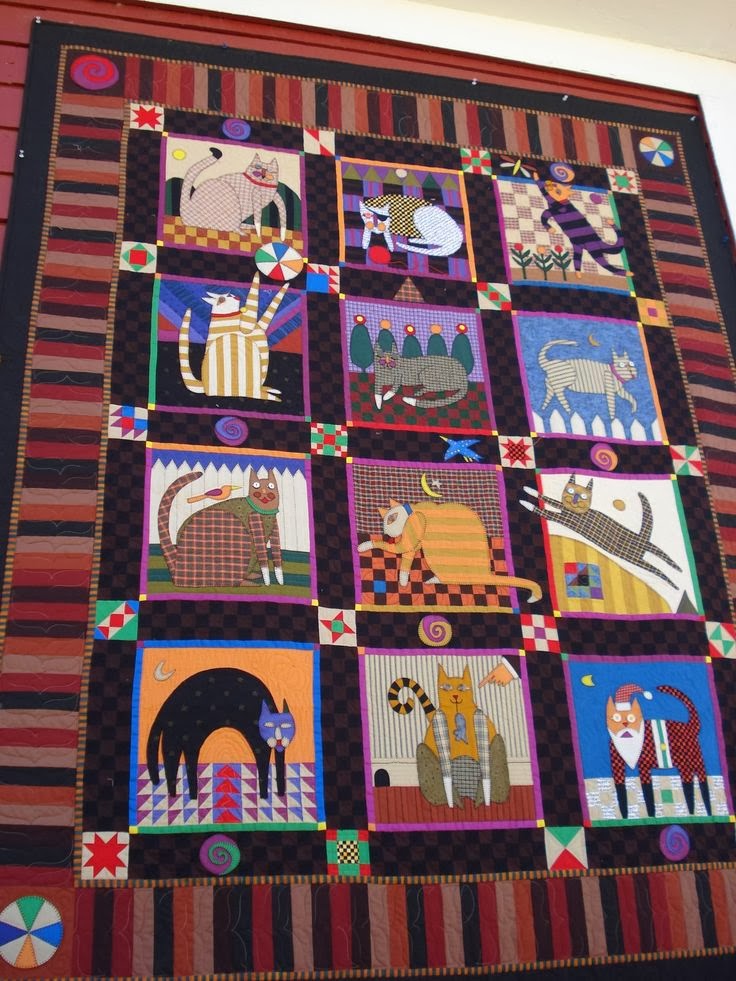 A little more than three years ago I wrote this post. Go take a look at it. Now, it is time to own up to how much I have accomplished on this project in three years.

Not very much at all.

The project came to the surface during the recent episode of the Dreaded Cleaning Virus and I still couldn't bring myself to part with it. I bought this BOM in 1999, friends. 1999. Block #1 is finished. Block #2 is 3/4 finished. Block #3 pieces are cut and the background is pieced. And that's it.

So today I consulted the list of UFOs and decided that this oldest one was the one to start with. Not that I intend to finish it up zippy quicky do. No. I intend to try to get the first row complete. With sashing and cornerstones.

So this afternoon I put borders around the first three blocks, just strips, one color to a block, not three or four. And without cornerstones (look closely, they are there, and prolly finish at 1/2"). Just nice plain borders. And trimmed the bordered blocks to 13". I did much of the bonding of Block #3. I found the floss I need to finish #2 (yes, I am hand-buttonholing these). I found most of the floss I need to do #3 and cut snips of the floss I need to buy. It will be very good to have a non-urgent handwork project for in front of the television.

Then I considered the sashing. Do you see how it is checkerboard, kind of black and brown? Do you wonder where they got that checkerboard fabric? They didn't. It is made from small squares cut and sewn together. I looked through the supplies and settled on a nice, dark, dark green. And cut pieces that are 13" by 3-1/2" inches. When I get done with the applique, I will piece the cornerstones for the sashing and put that there first row together.

And when that is all done, if I am still alive, I will start the second row.

Whatever on earth was I thinking.

LizA. said…
hhmmm, I'm thinking those checkerboard sashings are probably the easiest part of this quilt. Just remember, how do you eat an elephant? One bite at a a time. You'll get there. You've already got 1/4 of the blocks done.
Thursday, February 20, 2014 9:52:00 PM

Barbara Anne said…
Okay, thanks for the "I can identify with that" hooting to start my day! Well done in changing fabrics to suit yourself, too! Piecing tiny checkerboards for sashing??? Are you kidding me?

Albeit that I came to my tardy project very late, the project I want to finish is only 4 or so blocks from the 1997 Piecemaker's Calendar quilt pattern - darling little cottages. I have fabrics chosen for each block and the pattern pieces for the first block are fused and cut out. I came to a dead stop right there. 2 years ago. No excuse.

Tanya said…
You are so funny! Yep that is a humongous undertaking but I doubt that anyone knew that when they ordered the kit... Maybe the description needed to have been a bit more spelled out? Good for you for finding a solution! Keep at it!
Friday, February 21, 2014 7:03:00 PM

Millie said…
Don't look at me. I'd say if it drags you down to get rid of that albatross. I'd tell you Life's too short to be stuck doing something you don't really want to do. Sure, the sample is sixteen kinds of adorable, but if it isn't for you then dump it and don't feel guilty about it. The way I look at is I make quilts for fun, not for more WORK. So you get to give yourself a gold star when you finish. Ask yourself this: Will finishing it be worth the time it took to do it?
Friday, February 28, 2014 8:38:00 PM