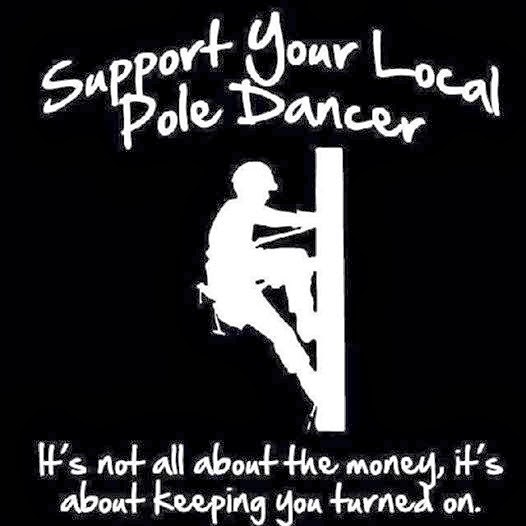 So I was wandering around Google Images in search of the right picture for this blog post, and just then my sweet friend Karen just posted this one on Facebook.

It started on Wednesday morning at 6:42 before I even had put the coffee on. Power outage. We'd heard there would be an ice storm coming during the night and when we got up one look outside told me I wouldn't be going to work. It was gorgeously treacherous. In our front yard were two huge tree limbs and all over the neighborhood more of the same. And electrical wires everywhere. The great 2014 Philadelphia Ice Storm had struck and our township had been hit the worst.

Our neighborhood, unlike our previous one, isn't prone to power outages, so initially I wasn't worried. I thought it might be a couple of hours. Hah! Joe hacked away at the driveway and eventually we got in his van and drove over to the hospital cafeteria to get some breakfast. Interestingly, just as we walked in the door, the power there also went out, but the emergency generators kicked right in. We grabbed some hot coffee and other good stuff and enjoyed. By the time we got home, the house had already begun to feel cold. We'd turned the thermostat down at bedtime on Tuesday and hadn't had the chance to turn it up before the outage hit. That night we drove back over to the hospital for another hot meal and to charge our cell phones. Going home, we took a bit of a scenic tour on the roads that weren't closed. There were fallen trees and down wires everywhere. We heard on the radio that hundreds of thousands of PECO customers were without electricity. For us, that also meant no heat, no hot water, no cooking. Joe had a huge load of logs he'd accumulated and we made the best use of the fireplace, hoping that Thursday morning would bring relief.

Thursday we went down to the village and had breakfast at the diner, sharing our booth with another couple, friends from church. We laughed a lot even though at that point the projected return of our power was 11:00 p.m. on Sunday.  Thursday evening found us back at the hospital (the food there is really, really good and amazingly inexpensive) where the regular power had been restored. Fortunately, in this house full of quilts, we slept warm. It was the rest of the time that was the problem! We took our meat out of the freezer and put it in coolers out on the porch where it remained frozen. Friday morning we opened the refrigerator and ate some of the food in it, cold, in front of the fireplace. By then the indoor temperature was in the neighborhood of 44 degrees. Joe discovered another downed wire when he went out with Blackberry. I phoned PECO to report it and they told me that the projected return of our power was 11:00 tonight. We were jubilant as we'd begun to worry about the radiant heat system in the kitchen and what would happen if the pipes froze. We drove up to Sherry's for a hot shower and stopped at the VFW post for the free hot lunch we'd heard was to be served. A couple more errands, prolonging the time in the warm car, and then we were home.

And then, mid-afternoon, just as suddenly as it had gone, it was back. After 56 hours. We feel fortunate, as we know there are still those who will be powerless until Sunday night; furthermore, we have had no significant damage to our property (although we may need to employ a tree surgeon to spiff up that big front yard tree). The house is warming up gradually, already up to a semi-toasty 54 degrees. And we'll get to watch the opening ceremonies of the Olympics tonight. Speaking of which, I need to go down and machine on the binding of the most recent quilt; I want to do the fingerwork in front of the television -- and the fireplace -- tonight.

Susan said…
Have to admit I was a little startled when I glanced at the graphic in your post. I know you don't write THAT kind of blog! We also survived a 44 hour period without power thanks to a gas insert in our fireplace. We had lots of trees down and, living on a hill, didn't want yo venture out until yesterday afternoon. I have learned that I get really cranky when I have to go more than a day without coffee and that there is such a thing as too much time to read. But all is well now and I got to spend some time at the sewing machine this afternoon and have a small project to bind this evening.
Friday, February 07, 2014 7:24:00 PM

Janet O. said…
Wow, we only lost ours for 6 1/2 hours--but we are a long way away from ice storms. Just snow and wind here.
Sounds like you took it in stride, Nancy, and made the best of it.
I have been doing some stitching during the Opening Ceremonies tonight. Just took a break to catch up on some blogs and email.
Friday, February 07, 2014 10:56:00 PM

jirons42 said…
Funny - I live in Michigan but when I heard on the news about all the power outages in Philadelphia, you were the first one I thought of.
Saturday, February 08, 2014 4:38:00 AM

quilt for fun said…
Reading you blog this morning was like re-living the
past 3 1/2 days at my house. Power was restored about 4am here, and thank
goodness, as I was at the end of my patience. My house was also 44 degrees, and we had a problem with water in the basement, too. All better now, though, but a bit of cleaning up, and hopefully sewing, in store today. By the way, LOVE your graphic!
Saturday, February 08, 2014 9:35:00 AM

Barbara Anne said…
Mercy! Glad to hear that your pipes didn't break, that you had places to go to get good food, and that it didn't last any longer than it did.

After Hurricane Irene in September, 2003, our little street was without power for 9 long days. Cold wasn't a problem then, it was heat and humidity. Our generator took care of the freezer.

We may have ice tonight but I hope for snow or rain.

Mrs. Goodneedle said…
So glad to read of your power restoration... what an adventure! It puts everything into perpective, doesn't it? We're not strangers to those types of winter "events", sadly, ice storms are much more common here that snow. I'd much rather see the latter! Warm wishes for happy quilt finishes!
Saturday, February 08, 2014 1:11:00 PM

LizA. said…
Glad you're back! 56 hours and you still have a sense of humor about it -- I'm impressed. We've been watching the coverage of first the east coast and now the Portland area. What fun. We did have 4 or 5" last nite, much to Arlo's disgust. Happily, we are finally out of the single digit temps we've had all week. Now if we can only get a little warmer we can take the heat pump off the emergency heat source.....
Sunday, February 09, 2014 10:06:00 PM