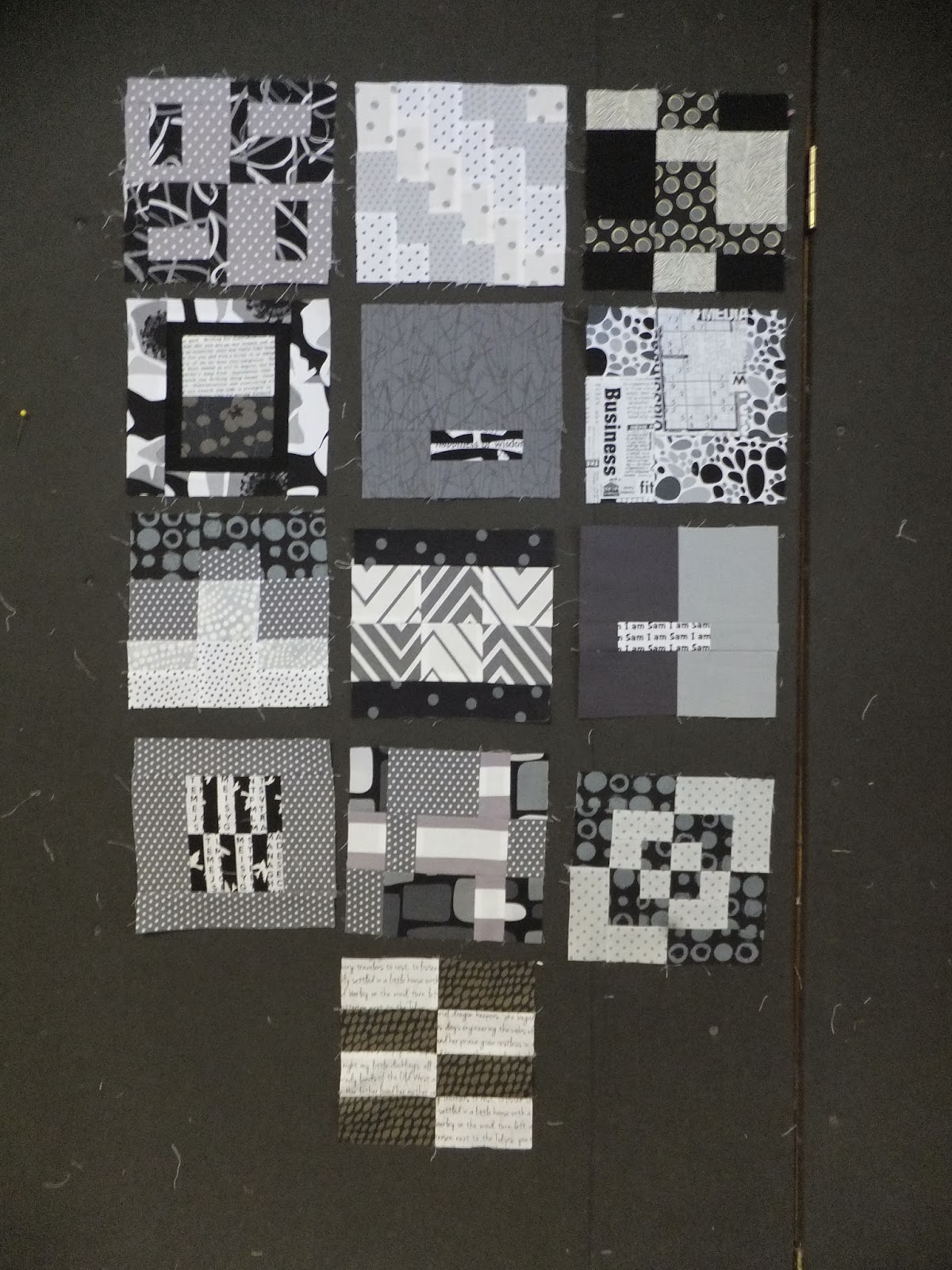 Very soon after I finished my first Tula Pink project, I started my second, this one in blacks, grays, and white prints. The fourteenth block got interrupted and will be done soon. While I'm not as excited about this project as I was the first one, I like it a lot and know it will "grow" on me as it grows itself. I'm planning on something similar to one of the layouts that Tula herself suggests, and about 60 more blocks are needed . . . .

In other news, neither of us has been as enthralled by the Olympics as usual. Might be because we're still harboring concerns about the possibility of some tragic event. Might be because they're in Russia. I dunno. But we've skimped on our Olympic coverage to rewatch the last several episodes of last season's House of Cards in order to refresh my memory (Joe's is fully intact) before starting the new season, which we are both eager to do.

The connection for all of the foregoing blather is that there is so much gray in House of Cards (Claire, for one, wears only black, white or gray and the same may be true of Linda), and despite the colorful ambiance NBC portrays, I don't seem able to shake my previous image of Russia as a gray sort of place.

So it seems right that I'd be working on this project now. I believe you can click once or even twice to make the photo larger.

Barbara Anne said…
Jazzy blocks, but you're right, it's a real departure from the riot of glorious colors in the first Tula Pink quilt. Will you call this Russia House of Cards?
Might you add one bright border?

We're put off of the Olympics this year, too, and are unsure why. Our guess for our aversion was those decades of unfair judging by the Russian judges (or perhaps that was our mistaken impression at the time).

Rain today and snow melt continues. I hope to make 4 simple blocks today for a little challenge with friends from a TX bee I belonged to when we lived there.

LizA. said…
How very different from your first one. Perhaps one little piece of red in the next block?

Olympics - bleah. We are so disappointed in the coverage. The only time they show any ice hockey is at 4:30 am our time. DH is really annoyed. And not a bit of curling. We gave up and started on House of Cards last nite. Wow, what an opener!
Sunday, February 16, 2014 12:09:00 PM

Karla said…
I really like the black and white theme. I think a shock of a little red (keeping the Russian Olympics in mind) or perhaps a shot of brilliant yellow to bring on spring. Just a small portion in one of the squares.
As for the Olympics, I have been enjoying them, but I also have a thread of fear of a terrorist attack. Also, I am not liking the Russian bashing that the news has been doing.
Keep on making me wish I was a quilter! :-)

Quayquilter said…
I have the book too and love both of your quilts. Someone has sent me DVD's of the first House of Cards series. We also enjoyed the original set in the UK on which this one is based. It's interesting comparing the two systems and the similarities and differences. Well done Kevin Spacey - he's a very clever man. . .
Mary
Monday, February 17, 2014 4:50:00 PM

Nann said…
We are the contrarians. We have watched more of these Olympics so far (about 5 hours total) than we have in years and years.

Putting your gray blocks next to the previous set is as though the viewer is looking through one of those "ruby beholder" viewers. (I have never used one, but I've read anough magazine articles to know how it works.)