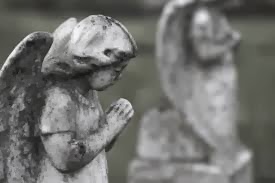 I have written little about my new position as a hospital chaplain. Mostly, this is because I am still in awe that I am actually -- after all of these years -- doing the work I have so long wanted to do.

I work for twenty-four hours at a time, responding to the trauma and code beeper, doing purposeful rounding on all of the units, receiving referrals and requests, and following up with ongoing situations. It is expected hoped that I will sleep for seven or eight of those twenty-four hours, but that is seldom the case and the hours are not consecutive. I never know what a shift will bring.

A recent one brought death.

I had been asleep for about an hour when the beeper shrieked. A Level One Trauma was coming in, and it was yet another older person who had fallen, sustaining an injury to his head. And this one didn't even happen outside in the ice.

My role is to support the family; in this case, the wife who was in the waiting room with the next-door neighbor, the kind of guy anyone would wish to have for a next-door neighbor. I introduced myself and explained that since her husband had been brought in as a trauma, the protocol called for me to attend; she shouldn't read anything more than that into my presence. We became acquainted and when she told me that her husband had had a heart attack two years earlier and had been on a blood thinner ever since, I felt a sinking feeling in my stomach.

Soon the chief resident came out and confirmed what I'd feared. The gentleman had sustained a massive intra-cranial bleed, he was on a ventilator for assistance with breathing, and would not survive surgery if it were attempted. Betty would need to make some decisions and the situation was complicated. Her daughter was six or seven hours away, her son across the ocean, and her husband's son at least twenty-four hours away. Would they want to come to see him? Should he be admitted to the MICU for 24-48 hours so that people could travel in? Or would it be better to stay in the ER and remove the ventilator? Only a few hours earlier the man had been joking with the neighbor about the ice on their shared driveway.

Many phone calls were made and, regrettably, many messages were left on voice mails. Betty's pastor was out-of-town, and it became my task to help her try to think clearly, to take into consideration her husband's wishes, what she wanted, and what the children might prefer. Ultimately she decided that the right thing would be to submit to the inevitable and remove the life support.

It took about twenty minutes after that for the gentleman's heart to stop. It was a slow and gradual process, and those famous words came into my mind: "Do not go gentle into that good night." He did go gently; death came quietly and slipped him away. Together Betty and I asked for the courage to entrust him to God's merciful care. I'd been with Betty for just three hours; when we parted, I felt as though I'd known her -- and her husband -- for many years.

Some hours later, I was called to a patient's room. The occupant had died a few hours earlier and his daughter was at the bedside, waiting for the funeral home people to come for him. Their religion required this. I chose to sit with her for the better part of an hour. She told me that his death had also been gradual and gentle; nothing to fear. She told me, "It is an honor to sit here with his body." And I told her it had been my privilege to sit there with her.

It was a difficult shift, but a meaningful one. Two women, both in very intimate stages of life -- and death -- had allowed me to share their experience, to offer support, to remind them of God's love. I'll never see either of them again, but they will be with me always.

Strlady said…
Thank you for sharing this with us.
And thank you for the work you do. I find that sometimes it's easier to lean on a stranger in times like these, just because everyone around you is holding their own.
Saturday, February 22, 2014 9:18:00 PM

Janet O. said…
What a wonder you are, Nancy! So well suited for what you are called upon to do. The people you serve are lucky to have you there. I know you are guided in your efforts to offer comfort and guidance.
Saturday, February 22, 2014 9:56:00 PM

LizA. said…
Thank you for sharing -- it is a good reminder of just how precious life is and how quickly it can change. This is definitely not a job for just anyone, but then, you are most definitely not just anyone. Hearing about your job makes me extremely grateful that there are people like you in the world.
Sunday, February 23, 2014 12:28:00 AM

QuiltingFitzy said…
Your heart is crowded by the souls you have touched. If you never gave comfort to anyone else, you should be proud of the work you have done. We are. (hugs)
Sunday, February 23, 2014 9:23:00 AM

Pat said…
Many of us, myself included, are at a loss as to what to do when an enormous crisis hits someone we care about. There are no words. You've put things in perspective here. Sometimes it is an honor just to sit.

Synthia said…
How wonderful for these two women that you were the chaplain that was there when needed. I'm sure they will always remember you as well.
Sunday, February 23, 2014 9:45:00 AM

Barbara Anne said…
As a former ER and surgery nurse, I know full well the importance of your presence with these worried families. In the offered tissue when there are tears, the hand to hold, the listening ear, the caring heart, and the prayers - silent if that is best and aloud when that is appropriate - you are God's love with skin on for these who need your comforting presence. You are a beatitude in action.

Bless you and all who do your job. Blessed are they who mourn ...

Death can be beautiful if you take the fear out of it and replace it with abundant faith and love. How lucky for all that your paths have crossed, because not only did you supply the much needed gentle strength, gentle faith, they supplied you with gentle love mingled with their gentle faith.

howdidIgethere said…
Would that all who face these situations had someone like you to be present with them. Bless them. Bless you.

Denise in PA said…
Nancy, what a beautiful post. I'm sitting here with tears in my eyes but also with a sense of peace. I'm so grateful you shared. Please continue to share these stories when you can. Hugs.
Tuesday, February 25, 2014 12:52:00 PM