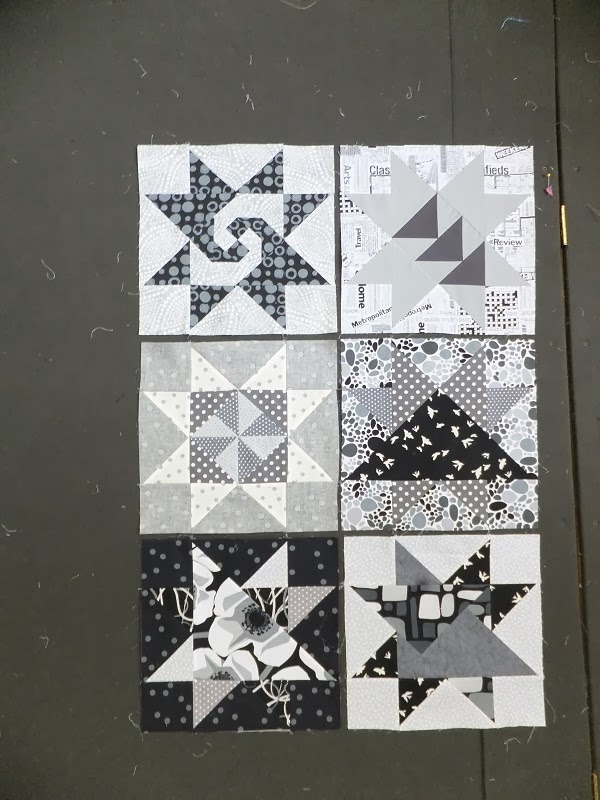 I believe I wrote earlier about the terrific swap that Kathy dreamed up for our April retreat. The name of the swap is Retro TV Stars and she's called for blacks, whites, and grays, solids and prints, in star blocks. There are twelve retreatants and eleven have elected to participate in the swap.

I was thinking that I wanted a bigger quilt than a dozen blocks would yield so was going for 20 blocks with generous lattice. After I finished my eleven blocks to swap and the one extra for me to have the even dozen, I started making my eight additional blocks.

Yesterday's SuperBowl and today's Snow Day afforded me the opportunity to complete the final six that I needed.

Several of my blocks came from this book, now out of print and hard to find. I acquired it years ago, well before I was competent to attempt many of the blocks. But it sort of lurked in my memory and when Kathy proposed this swap, I pulled it out and found my skill level has pretty much caught up with the book! The block in the upper right gave me some trouble, but that may be because I needed a nap. Ultimately, it behaved.

I'm so grateful to Kathy for dreaming up this wonderful exchange! Now, where's April?

Barbara Anne said…
Love your jazzy star blocks and that you'll be ready to hit the ground running (so to speak) when you have your other star blocks from the swap!

Great use of time thru the Super Bowl (no pro-football fan here) and on a snow day, too. We have had lots of rain.

I haven't seen that book but will check to see if our library has it. One of my favorite block books is Marsha McCloskey's "Block Party". Her instructions are so easy to follow and she shows alternate looks for each block by changing fabric value placements.

Karla said…
When I first saw the picture of these wonderful blocks I was captured, I think they are exquisite. These almost had me buying quilting supplies. And I just hate to sew!

LizA. said…
I still love these blocks. I've always loved stars of any kind.....I'm beginning to think that it might be time to dig into that stash of black and white fabrics that I have. I certainly have enough, especially when if I add from the grays......Can't wait to see how this looks all finished up....perhaps red binding?
Tuesday, February 04, 2014 3:10:00 PM