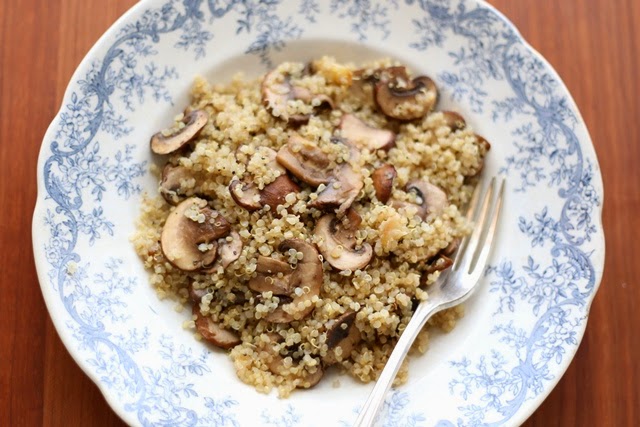 It's about the quinoa.

On the infrequent occasion that I go to the salad bar at Whole Paycheck Whole Foods, I get a portion of a delicious grainy cold salady kind of thing that's labeled "quinoa." It tastes good. I know of quinoa as something that gluten-free people espouse, and after eating it at WF, I thought I might make it at home. So I bought a small bag and a few months ago made something-or-another (I can't remember what it was, so it couldn't have been spectacular). The other day I came across the half-full (or half-empty) bag of quinoa and decided to use it for dinner.

Not so. I taste-tested it before serving and upped the amperage on the parmesan cheese. Added some salt and parsley, too. Himself peered at it and said, "What's this? I think it's alive." I looked at it again; the whitish collar-things around the grains had, in some cases, separated from the grains. It didn't take a lot of imagination to perceive them as wiggling about.

It was not a huge success. I  served it with some grilled chicken and a nice fresh green vegetable. I wanted to like it. I really did. Each of us ate it without a lot of further comment.  I'd like to say that was that, but, you see, the recipe had a massive yield. A mother load of quinoa with mushrooms and roasted garlic.

A day or so later, the quinoa, weighing heavily on my mind in my fridge, came to the surface in conversation. We agreed that it was neither of our particular cup of tea, not to confuse things metaphorically. Yet it wasn't horrible, and it would be wasteful to throw it out. I started thinking of ways to improve it. There were still a couple of pieces of the grilled chicken. I thought out loud, "Well, I could throw in a whole lot more grated cheese. And perhaps some onion. And I could cut up the chicken and mix that in . . . .  " and at this point he cut me off, crying out, "Don't sacrifice the chicken!" And I started to laugh because all at once I was thinking of Lynne and how if she were here she'd jump up and start working on her next quilt, "Don't Sacrifice the Chicken!"

More better I should sacrifice the quinoa.

Janet O. said…
Oh, too bad. Sorry this didn't measure up to the WF version. Hope you don't give up on home-cooked quinoa altogether. There's got to be a recipe out there that you will like.
(And definitely don't sacrifice the chicken.)
Thursday, June 05, 2014 3:28:00 PM

floribunda said…
I'm with you, Nancy! I know people who practically live on the stuff, but it always looks creepy to me... and the taste/texture leaves me cold. I'd rather eat any other grain.
Thursday, June 05, 2014 3:51:00 PM

Judi said…
I've only ever eaten quinoa cold, as a salad, and that seems to be how you have liked it before?

Try it at home again, using a favourite salad dressing which the quinoa will soak up wonderfully. Just use any rice salad recipe that you like.

Karla said…
LOL! I love the idea of don't sacrifice the chicken quilt. I seem to remember something about a rubber chicken...perhaps a "don't sacrifice the chicken" trivet or potholder. As for Quinoa don't give up on making it! Here is a most amazing recipe. I make it all the time and everyone loves it (well, all but one, but we are talking about 15 people. Spicy Quinoa with Cranberries

Barbara Anne said…
We tried quinoa, too, and tried hard to like it. Various recipes and additives did not help at all. We next decided that life is too short to willingly eat something so objectionable and out it went. I feel the same way about brown rice - it tastes like dirt to me.

Happily, there are many, many, many other foods that are delicious to my palate. Thanks be to God!

Pamela Kieffer said…
Quinoa is the staple food for people in Chile. Because of the latest food craze in the U.S. the price of quinoa has gone up and the Chilean people can no longer afford it. Sad.
Friday, June 06, 2014 11:09:00 AM

LizA. said…
I'm with you -- sacrifice the quinoa. I've had 1 salad 1time that was just, ok. Everything else I've ever had with --uggh.

Denise in PA said…
I'm with you on the quinoa, Nancy. I want to like it. I know it's good for you. I bought a bag and hubby who cooks the dinners on weeknights and generally isn't a real health nut - made it as a side one night and really liked it. Now, we have quinoa at least once a week. Sigh. I just grin and bear it - or eat (a little bit of) it.
Friday, June 06, 2014 1:21:00 PM

Anonymous said…
You made me smile. I eat a lot of quinoa, it's a staple in my cabinet, but NEVER as the main dish. I toss in a handful or two if I'm making soup or stew or chili. It's pretty indistinguishable in many things, just as healthy as main dish recipes, and no one really notices it's there. Sometimes I cook some sort of half soft and then use it as a salad condiment, along with bacon bits and sunflower seeds. I haven't used it in bread yet, though one could. Think of it as an additional vegetable, not as a main dish anything. =)
Saturday, June 14, 2014 1:03:00 AM