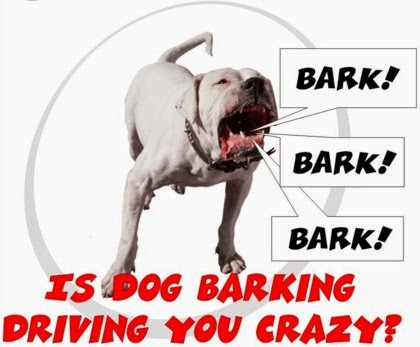 The neighborhood where we live has a high canine concentration. Many families have a dog or two, and most of the time we live together in peace. There's practically no time when you don't see someone walking a dog down the street, and there's almost a ballet that takes place when one dog walker going North spots one going South in the same block. Someone needs to reverse direction or cross the street, and without any conversation or signaling, somehow we know when it is our turn to yield. Many of the dogs absolutely dislike other dogs; ours is one of those, although he has developed a certain tolerance for Max and Zero, a pug and a ball of fluff that live at our one corner, and Kiki, a yellow beauty who resides at the other corner.

Walking is manageable. We all seem to adhere to the same code of behavior. But there's another issue. Yup, barking.

The people across the street are the most unfriendly neighbors on the face of the earth. In fifteen years, they have not only never had a conversation with us, but actually turn and go inside or walk to the back of their house if they see us come out the front. Guess they never had a daughter needing to sell Girl Scout cookies; guess they never needed to borrow that tall ladder that somebody on the block always has and is willing to lend. After two years of being deliberately shunned by these people, we dubbed them The Nonspeakers, and most of the time don't give them a second thought.

But it gets worse. It is summer and we have our windows open. So do the neighbors. And Lab and Shep are early risers who must be on duty beginning, apparently, by six o'clock. After a few mornings of rude awakening, I decided that Nonspeaking was to be a thing of the past and I put on some clothes, crossed the street, and for the first time approached the front door. Ringing the doorbell repeatedly yielded no response. So I began banging on the front door. The barking intensified to a frantic pitch and pace. "Roxie!" exclaimed Mrs. Nonspeaker, but did not come to the door. I persisted. Eventually Mr. Nonspeaker responded (he used to also have the nickname "Pretty Boy," but as another neighbor pointed out, "He's not so pretty any more!") and I drew his attention to the problem. He seemed a bit dull witted and said they were his children's dogs that they were keeping for them on weekends. When I said I that while the constant barking during the day was one thing, being forcefully wakened so early in the morning was another thing entirely, he responded that, actually, they couldn't sleep either. He guessed he'd have to put the dogs in the back of the house. I left the doorstep, feeling a confidence that the issue isn't over yet.

I suppose that more early morning neighborly visits are in order. Or perhaps a phone call to the local police department.

But, you know, I can't help asking myself, "What would Walter White do?"

Barbara Anne said…
Oh, I hear you! The family that owned the house on the other side of AMIL (two houses from us) moved out and their adult son moved in - with 5 dogs that he houses in some kind of kennel at the back of the long property. Not far enough as those dogs set up a cacaphony when they're hungry, cold, wet, lonely, or whatever, no matter the time of day or night. The added problem is that the back of his property has the dogs very near two homes that face the next street over and those folks have called the police many times. The barking of these 5 dogs also sets of the pack of beagles who are across the street and over one house in an outdoor pen. It can be deafening and there seems to be no solution. Sigh!

Unknown said…
I love dogs and cats although we actually have neither (the neighbours two borrowed cats who come to our house for a bit of peace don't count) but I am glad from this point of view that most of our neighbours have cats rather than dogs - people can be so inconsiderate
Monday, June 23, 2014 4:45:00 PM

LizA. said…
I know your pain. We used to have neighbors from the Ukraine who kept their poor Boston Terrier outside 24/7. As an owner of a dog that likes to bark, and also despises other dogs, we make every effort to keep him quiet, including the use of a "no bark" collar since we don't like to hear barking dogs and don't want to be the cause of distress to others. I hate using the collar, but when you have neighbors it's the polite thing to do.
Tuesday, June 24, 2014 11:58:00 AM