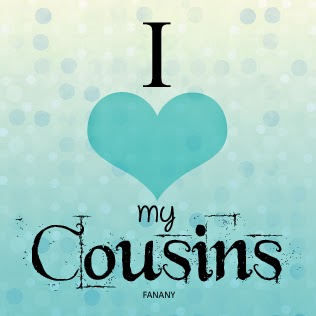 I have five cousins, two on my paternal side and three on the maternal side. As a child, I was jealous of friends who had dozens of cousins and anguished for a friend who had none.

Of my five cousins, four are girls and one is a boy, though actually by now they are women and a man. Four are my seniors and one is younger than I am (but not by much). Three live in far-away states and I see them rarely. Two live nearby and I don't see as much of them as I would like. The oldest of us is not far from 90 and the youngest is, I think, 67. When I think about those who live far away, I am increasingly aware that we don't have enough contact and that possibly I have seen them for the last time. So, to sort of make up for that, I try harder to see and spend time with the two cousins who live nearby.

Today my sister and I went to have lunch with one of our cousins. "Phyllis" is unwell. She has been diagnosed with something none of us had ever heard of before: Lewy Body Disease. Turns out it is the second most common type of senile dementia; it is similar to Alzheimer's without the mood swings, but with troubling hallucinations and a tendency to fall. It has features in common with Parkinsonism and is often mistaken for that disease.

Phyllis has always had a sunny disposition and that hasn't changed a bit. She's a bit forgetful, but, heck, aren't we all at this point? She has the endearing capacity to laugh at herself and even invites us to join her. She gets distracted but still has her fine sense of humor. Sometimes her dates are mixed up (she laughingly told us we were 45 hours late for lunch, as she'd expected us two days ago), and she's having some trouble with days and nights. She's a bit on the clumsy side at this point and her problems are compounded by something mysterious going on in her back that makes it hard for her to stand erect. All of this is plaguing Phyllis, but she is still our cousin, the same cousin that we have always loved.

It won't be long, I think, before Phyllis needs to move to some sort of a facility where she will be safe all of the time; her family has already begun investigating options. Today we had a wonderful time with our sweet cousin. My sister brought sandwiches and I splurged on dazzling cupcakes from Whole Foods; Phyllis introduced us to a delicious blueberry beverage. We ate and laughed and told jokes (some of them a bit on the colorful side) and remembered family times. We're already planning to do it again next month. And will continue as long as we can.

Just before we left, Phyllis -- who had always been closer to my sister than to me -- asked specifically, "Nancy, do you think people know when they are getting close to dying?" I said that I thought in some cases this was true. Her eyes filled up a bit as she told me, "I keep thinking about my Daddy and how I wish I could see him. I wonder if that is because I am close to dying." Mercifully, my instincts provided an answer: I told her, "I think you know there is something going wrong with your body and with your mind and you know that your Daddy would take care of you if he were here. I think you wish you had your Daddy to take care of you. I don't think it means you are going to die soon."

I hope I was right.

Anonymous said…
John's mother had Lewy Body Dementia. Initially, she was thought to have Alzheimers, but a savvy neurologist figured it out. It was very sad, but thankfully, she did not linger very long after she no longer could take care of herself. Like Alzheimers, it is a horrid disease.
Kathy B
Wednesday, June 25, 2014 8:06:00 PM

Janet O. said…
How sweet that you could give her such an answer. It is good that you and your sister are making time to be close while you have the opportunity.
(BTW, this made me curious to count my cousins. I have 35. Don't think I have ever counted them before.)
Wednesday, June 25, 2014 8:27:00 PM

Unknown said…
I found this blog very sensitive and loving, Nancy. I heard and felt the wisdom of your supportive response. Well done - and I, too, hope you were right!
Wednesday, June 25, 2014 8:56:00 PM

Quiltdivajulie said…
Your answer was inspired . . . and how wonderful that ya'll are spending time together NOW instead of waiting until it is too late.
Wednesday, June 25, 2014 10:17:00 PM

Lynda Halliger Otvos (Lynda M O) said…
Nancy, so many of the things you say to people are incredibly perceptive and inspirationally on track. Wow, I wish you lived near me; I could benefit from having a wise woman like you help me thru some of these harder life moments.
Thursday, June 26, 2014 2:38:00 AM

Anonymous said…
Nancy, thanks for sharing your moving story. Your cousin has great good fortune to have you in her life.
Hugs, Neame
Thursday, June 26, 2014 7:18:00 AM

Mrs. Goodneedle said…
God gave you the right words at the right time... how blessed Phyllis is to have you as her loving cousin. Sending supportive hugs to you as you plan future outings with your precious cousin, what a lovely thing to do... for all of you!
Thursday, June 26, 2014 8:44:00 AM

suz said…
wow, this just truly touched my heart! I have a ton of cousins - we seemed to have come in groups - the oldest "group" is in their late 70s, early 80s - I'm trying to keep in touch with them more for the same reasons you are. Hopefully you'll have many, many more visits with Phyllis.
Thursday, June 26, 2014 9:37:00 AM

Barbara Anne said…
Oh, this brought tears to my eyes. Bless Phyllis' heart and the hearts of those who love her. May she keep her sense of humor and be at peace.

Your answer to her question was wonderful and as true as true can be.

You're so right to keep in close touch with family and to cherish the time you still have to be together. Here's to those who share your memories!

LizA. said…
I think your "weekend" job has trained you well. I'm always at a loss for words in situations like that. Enjoy the time with Phyllis while you can. My mother's sister, also named Phyllis, was diagnosed with Alzheimer's while still in her 40's. That horrible disease robbed her of some of the best years of her life.
Thursday, June 26, 2014 5:06:00 PM

QuiltingFitzy said…
Your reassurance was right on the money. Best to put her mind at ease, even if only momentarily. Thank you for reminding us to keep our family together when we can, and cherished nonetheless when we cannot.
Sunday, June 29, 2014 8:32:00 AM

Beatrice said…
Just wanted to say I find your your answer to your cousin's question very touching and so wise.
Beatrice.
Friday, July 04, 2014 3:31:00 AM