An Entire Flock of Aunts 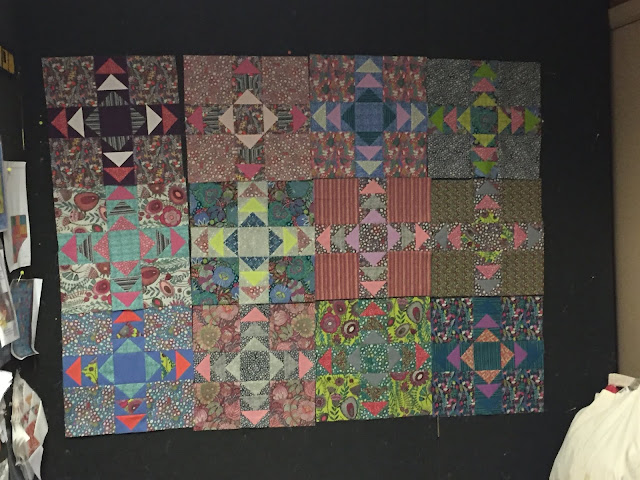 I think I had posted earlier than I needed a total of ten pieced blocks for The Aunts' Quilt. When I got the tenth one finished, I felt this sense of accomplishment. Until I looked at the pattern cover. And saw that, in fact, I needed a dozen pieced blocks.

I had the feeling that I had used up all of the best fabric combinations and that the very last aunt would turn out to be Aunt Gertrude. You know, the aunt with the big wart on her chin and clothes that carry the odor of mothballs?

Again, I was mistaken. She's so cute, I'm calling her Gertie. She fits in just fine. So I'm not even going to tell you which one she is!

I'm more than ready to begin the appliqué blocks. But I'm going to need a fair amount of background fabric before I can start. Some of us have scheduled an outing to Burkholder's for just this purpose!

Anonymous said…
Oh how fun! A trip to Burkholders. And perhaps Weavers too. Then of course you might as well stop in Intercourse...just a perfect day in fabric fondling and eye candy delight. Hoping to do the same when the quilt show happens in March.. I have been enjoying(?) your seventy notations. I have a big birthday this week and I may be in the middle of the 70's, but still feel like my 20 year old self, albeit the mirror disagrees. Looking forward to the appliqué blocks. Dotti in CT
Monday, February 03, 2020 7:08:00 AM

Quiltdivajulie said…
Twelve beauteous aunts - each with their own personality - just lovely! Have a terrific b-day today!!
Monday, February 03, 2020 9:28:00 AM

Janet O. said…
Your humor makes me laugh aloud! Your aunts all look splendid--enjoy your road trip.
Is today your birthday? If so, have a great one. We celebrated my Mom's 90th just yesterday!
Monday, February 03, 2020 11:32:00 AM

Barbara Anne said…
Love the colorful Aunties and am glad you found the perfect fabrics to use for Gertie.

Enjoy the search for the perfect background fabric! Isn't it sad that those who buy quilt kits don't have the thrill of the search?

MARY MARSHAL said…
Hello! I'm very excited to inform everyone that I'm completely cured from my HSV 1&2 recently. I have used Oregano oil, Coconut oil, Acyclovir, Valacyclovir, Famciclovir, and some other products and it's really help during my outbreaks but I totally got cured from my HSV with a strong and active herbal medicine ordered from a powerful herbalist and it completely fought the virus from my nervous system and I was tested negative after 12 days of using the herbal medicine. I'm here to let y'all know that herpes virus has a complete cure, I got rid of mine with the help of Dr Edes and his herbal exploit. Contact him via email: dredeshome@gmail.com or +2348151937428 Or visit his website; https://dredesherbal.webs.com
Tuesday, March 31, 2020 4:33:00 PM