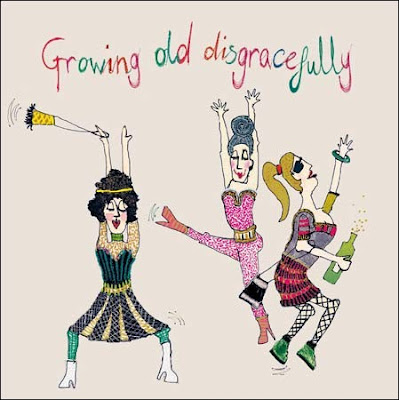 Another bit from Being Seventy:

Pages 108-109: It is something of a shock to me to realize that I have reached the point where there is not much chance that I will succeed in making any notable changes or improvements in my personality or character. Somehow I have assumed that this was an endless possibility and that in time I should be able to decide exactly what I want mine to be and get it formed that way. Now I know that I am firmly set and not subject to alteration. Oh, I hope to go on growing, but the growth will have to be along the old lines. Just a little more of the same — and then the effort to hold the line and not deteriorate. Acceptance — an ideal but not always a practice — is now a necessity.

Someone I used to know was famous for saying, "Y'know, when we get older, we don't get different. We get more so." What she meant was that as we age, it is kind of like the water is gradually boiling off, and we are left with the essence of who we are.

I think she was absolutely right. I have had two women in my life -- one for 75 years and the other for forty-eight -- who have always been easy-going and delightful. Now that they are in their nineties, they are even more so.* I knew a woman who was cranky and selfish, and as an octogenarian, she was irritable, self-centered, and miserable. My friend spoke of someone who had always been suspicious, and as a very old person, she became close to paranoid.

What will I be like when I am even older than I am now?

Let's just say that I was tremendously disappointed that I had to put the above quote in teal because the bright magenta in the picture isn't part of Blogger's color choices.


*They don't know each other. I wish they did. They would enjoy each other. They even look alike!

Mrs. Goodneedle said…
So much to ponder here. I am enjoying reading these tremendously, what I do with what I'm reading, and how it's processed, is enriching. Thank you, my friend, for challenging me! I need this.
Tuesday, February 04, 2020 8:31:00 AM

Quiltdivajulie said…
I have semi-seriously said (for years) "I am who I am, like me as I am or find someone else to hang out with" -- clearly that is more true than I ever realized! Fabulous selection to share today - I needed to read those words (I tend to let myself become fearful - I need/want to do much less of that and now I know why it is even more important to remain positive).
Tuesday, February 04, 2020 8:51:00 AM

Carol- Beads and Birds said…
I am thinking that I don't agree with that page at all. I am 68 and I have changed a great deal in the past couple of years. Some things I set out to change. Somethings have been brought to me by debate with a youthful mind. I would be SO NOT HAPPY if I thought my changing was done. No, I can't agree at all.
Tuesday, February 04, 2020 10:14:00 AM

MARY MARSHAL said…
Hello! I'm very excited to inform everyone that I'm completely cured from my HSV 1&2 recently. I have used Oregano oil, Coconut oil, Acyclovir, Valacyclovir, Famciclovir, and some other products and it's really help during my outbreaks but I totally got cured from my HSV with a strong and active herbal medicine ordered from a powerful herbalist and it completely fought the virus from my nervous system and I was tested negative after 12 days of using the herbal medicine. I'm here to let y'all know that herpes virus has a complete cure, I got rid of mine with the help of Dr Edes and his herbal exploit. Contact him via email: dredeshome@gmail.com or +2348151937428 Or visit his website; https://dredesherbal.webs.com
Tuesday, March 31, 2020 4:32:00 PM