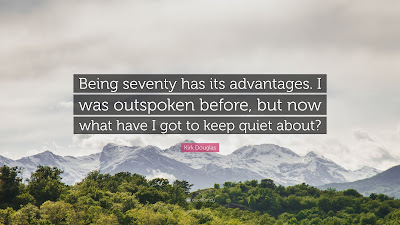 Continuing with reflections from the book, Being Seventy:

Page 85: Whittier wrote at eighty, “I do not believe it possible . . . to be sinless.” It would seem that if anyone had led a blameless life, he had. But so did all the saints lament their sins. I think I know what they meant.

After one has passed the stage of committing the grosser sins and even of being tempted by them — temptation having been removed by age or lack of opportunity — then the hidden spiritual sins come flocking: pride, envy, jealousy, anger, all forms of concealed unlovingness, and that sin considered today to be the top one of all, hypocrisy.

I remember Lloyd's saying one time (many years ago) something about the sins involving the genitals get the most attention, but there are so many more that may be worse.

"Concealed unlovingness." That's what I have got to keep quiet about now.
Email Post
Labels: Being Seventy

Barbara Anne said…
A Quiltdivejulie said - but I don't have the book yet. How dismal the news is.

Janet O. said…
I've been reading your 70s-related posts with interest. I still have a few years to go to get there, but having worked closely with my parents and in-laws through those years, I have picked up a few things. I am curious to see who I am when I reach that stage (in the not too distant future). If I have become what I hope to have become, having avoided the pitfalls I saw in parents and in-laws, or will I succumb to the same habits I saw in them that I don't want to develop?
Wednesday, February 05, 2020 7:30:00 PM

Carol- Beads and Birds said…
More food for thought here. Being a person who does not believe in any organized religion how is what is a "sin" determined. I have my own view on it. One thing I know is that I know myself well. What was hard to do in the past has become more easy as I grow older. There are fewer occasions now than before to indulge in what society would call a sin. And politically speaking our leaders want me to believe what I always THOUGHT was a sin..is not. Such a double standard.
xx, Carol
Thursday, February 06, 2020 10:08:00 AM

MARY MARSHAL said…
Hello! I'm very excited to inform everyone that I'm completely cured from my HSV 1&2 recently. I have used Oregano oil, Coconut oil, Acyclovir, Valacyclovir, Famciclovir, and some other products and it's really help during my outbreaks but I totally got cured from my HSV with a strong and active herbal medicine ordered from a powerful herbalist and it completely fought the virus from my nervous system and I was tested negative after 12 days of using the herbal medicine. I'm here to let y'all know that herpes virus has a complete cure, I got rid of mine with the help of Dr Edes and his herbal exploit. Contact him via email: dredeshome@gmail.com or +2348151937428 Or visit his website; https://dredesherbal.webs.com
Tuesday, March 31, 2020 4:32:00 PM