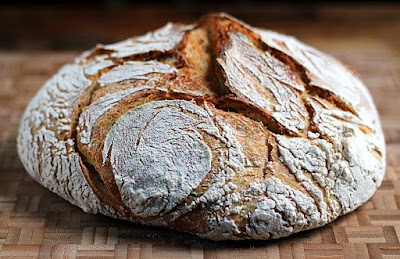 Facebook is full of reports from people learning new things during this time of sequestration. A handful of people that I know have discovered sourdough and have been baking up a storm. I'm not talking about the Amish Friendship Bread that came in a ziplock bag and was very popular during the 80s. I had one of those for quite some time, sharing starter with friends until they began to glance out the door and disappear when they saw me approaching. When we finally gave up on it, my daughter asked why and I told her, "It was just another mouth to feed." She thought that was hilarious. Actually, she still does. But I digress.

I'm talking about real bread. Real sourdough bread. Not a sweet coffee-cake sort of bread. You know what I mean. My friend Kathy mentioned on a Zoom the other night that she and her household were about sour-doughed out and she was ready for something else. Since I had yet to buy into this current craze, I asked if she might share some starter. Of course she would, and she, the starter, the recipe and instructions all showed up six feet or more from my front door the next day.

The accompanying instructions alleged that this particular starter had originated in 1847 on the Oregon Trail and had been passed down ever since. No pressure. None whatsoever.

I fed and nurtured the starter. I spoke gently to it. I praised it. I was hopeful. Today was the day. It took most of the day and made a colossal mess more than once. But I persevered. The recipe called for 3C flour, 1C warm water, 2C well-fed starter, and 1-1/2 tsp Kosher sea salt. What a sticky, liquid mess it made! It gunked up the KitchenAid, spreading into the whatchamacallit the holds the paddle in place. It really gunked up a towel. It had its good qualities, too. It rose obediently. It smelled enticing.

Finally, by dinner time, it was done and cooled. The picture above is from the guy who originated the recipe (how he's still here and posting on the internet after traversing the Oregon Trail is beyond me). He has a nice website with lots of pictures.

Well, I didn't get a boule. Rather, I got a frisbee. I investigated other recipes on the internet; they seemed to have a much higher flour-to-liquid ratio. I'm not giving up. Our frisbee bread may be on the squatty side but it tastes terrific. My other friend Kristina is raving on her FB page about a sourdough coffeecake. It should take about a week to feed 1847 enough to try that. Stay tuned. 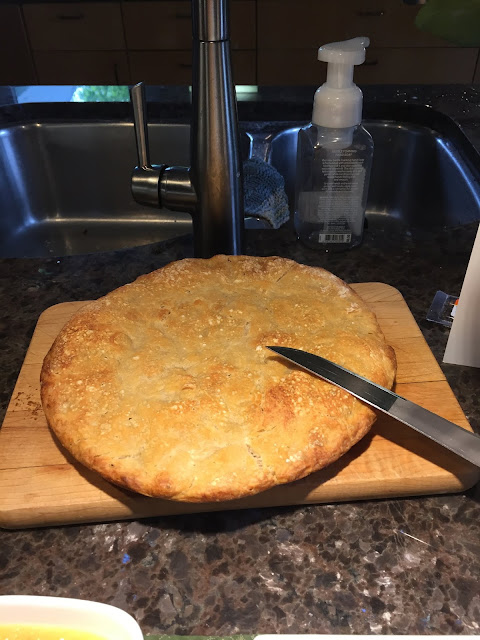 Quiltdivajulie said…
You and Mrs. Goodneedle need to compare sourdough notes - she had a flatter than anticipated first loaf, too. So long as it tastes good, you had a success. Enjoy . . .
Tuesday, May 19, 2020 9:37:00 AM

Ruth said…
Have you visited patchworktimes.blogspot.com? Judy Laquidera has been researching and baking sourdough for a week or two now. You might find some ideas there.
I remember the Amish bread that you had to feed everyday. One day I forgot and used a metal spoon to stir it with, and it died. I was glad. I couldn't take having to bake an Amish load so frequently. "Just another mouth to feed" - HaHaHa!!
Tuesday, May 19, 2020 9:38:00 AM

Mrs. Goodneedle said…
Oh, yes-- I've been there too, no boule for us either, and a similar pancake-shaped disk. I'm not giving up! Best wishes with future baking exploits, I did use some starter to make EXCELLENT English muffins, however.
Tuesday, May 19, 2020 11:08:00 AM

Barbara Anne said…
Frisbee or flat bread, but not a boule, for sure. We're also "sourdoughed out". Have I sent you the no-knead recipe I found about 6 months ago? DH has made it 8 or 10 times and it's delicious white bread and it's always risen. I'll send it with a photo of one of DH's boules. We've just finished eating the most recent boule.

Loved your "another mouth to feed" about the bread starter. I, too, had some back in the 1980s and was glad when mine died. Mine didn't have the heritage your current bread starter has or the emotional baggage that could happen if your starter dies after almost 180 years. As you wrote, no pressure!

OTquilter said…
It happens to all of us! The King Arthur Flour people are helping me learn the ins and outs of sourdough, thank goodness, as well as what to do with the discard--sourdough crackers! Sourdough biscuits! No matter what you want to bake, the folks at KA are your friends.
Tuesday, May 19, 2020 9:53:00 PM

Nann said…
Oh, that "Amish" friendship bread. It spawned (hah!) recipe compilations for variations on the theme (banana, zucchini, whatever). I was single the first time I received a batch and that immediately overran my consumption capacity. Then we got married and it was still too much....I admire all the sourdough bakers. Baking with yeast is a talent I do not have.
Wednesday, May 20, 2020 9:57:00 AM

Janet O. said…
Oh, Nancy, you had me laughing here! Great post.
Back in my wheat flour baking days hubby would have loved to have me make sourdough. I did try a couple of times to keep a started alive, but like you said, it was another mouth to feed--and one incapable of reminding me it was hungry. I never even made one loaf. Not even a Frisbee!
Wednesday, May 20, 2020 12:03:00 PM