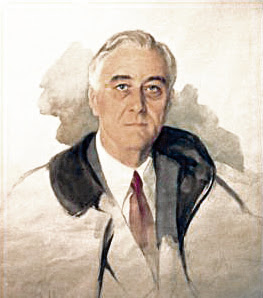 This morning my friend Guenveur wrote on Facebook that she'd been watching the Ken Burns series about The Roosevelts. She went on to say that she remembered the day of his death, and the impact on her family. This caused me to reflect upon FDR and my own family of origin.

I was an infant when he died.

A print of the Unfinished Portrait in a narrow black frame hung on the den wall of the family home for as long as I can remember.

Until my older sister graduated high school, there was not a single photograph on a wall, on a table, or on a dresser in our home. No pictures of deceased grandparents, no Kodaks of the beloved family cocker, nada. But there was this painting.

My parents married during The Great Depression and, hence, were frugal. The budget line for "entertainment" wasn't very big. Going out to eat dinner was a rare thing.  But when I was thirteen, the play "Sunrise at Campobello" opened in Philadelphia before going to Broadway and my father bought tickets for the entire family and my sister's fiancé to attend. It was a near-sacred occasion.

In the early 80s Joe and I took the children on a camping trip in Canada's Maritime Provinces and on the way home I noticed a sign for Campobello and we diverted from our planned route so that we could visit FDR's home. The impact of that portrait for all of those years compelled me to do it.

We watched the Ken Burns series when it first came out. I've seen every FDR movie that I ever heard of. I read the Doris Kearns Goodwin biography and every other biography I have come across. And a few years ago Joe and I made a pilgrimage to Hyde Park where we visited all of the Roosevelt properties.

It's almost as if he were an ancestor.

And I wish we had a leader like him right now.

Nann said…
We've been to both Campobello and Hyde Park and noted at both places the close proximity of Sara's room to Franklin's. Helicopter mother before helicopters? (Haven't been to Valkill Cottage, though.)
Friday, May 08, 2020 11:59:00 AM

Barbara Anne said…
I've never been to either Hyde Park or Campobello, but the Franklin Delano Roosevelt Memorial in Washington, DC shouldn't be missed. It is awe-inspiring in the true sense of those words. I, too, wish we had a president like him now and that is an understatement.

Quayquilter said…
There were great men in those days. As the Queen spoke to us yesterday at the same time her father did 75 years ago I was glad she was our Head of State rather than a president whose suitability can't be guaranteed.
What a wonderful post. I have read and learned quite a bit about FDR and Eleanor. How wonderful how someone born to privilege and who could have just been a playboy served his country so well and took such radical and visionary measures to help those less fortunate in the Depression years and guided the US through war years.
Saturday, May 09, 2020 5:29:00 AM