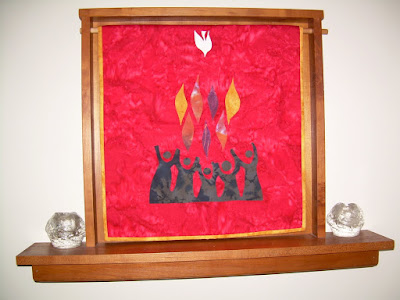 Every single year, on Pentecost, I think about that night.

It was so long ago. More than forty years, because we were living in Chicago and didn't have Andrew yet.

We were living in a Chicago suburb that always reminded us of "houses made of ticky tacky" and looked pretty much the same. Most every family -- including us -- had a husband and a wife and a boy and a girl. We also had a cat and a dog. Joe was working at his first job out of graduate school; the hours were long and travel was involved. I was navigating the world of stay-at-home mom, my days filled with diapers and Sesame Street, and coffee with neighbors.

Out of the blue one day, my friend Sharlene asked me if I would want to go to church with her on the eve of Pentecost. We weren't church-goers at that time, and I didn't even know what Pentecost was. But it was a night out, with a girlfriend, away from the little ones.

So I went to the library and looked up "Pentecost" and learned that this was a Christian festival celebrating the coming of the Holy Spirit and the birthday of the church.

Sharlene was what was called a Charismatic Catholic. And her church was having a special service, a vigil, not a Mass, that began at 11:30 p.m. on the night before Pentecost. She just knew it was going to be very, very special, and wanted to share it with me.

It was a pretty church, not very old, with a high ceiling. There were more people there than I would have expected at 11:30 on a Saturday night. As in a Quaker Meeting For Worship, there was no liturgy, no program to follow. But it was far from silent. It began with someone's reading the passage from Acts, " and when the Day of Pentecost had come," followed by spontaneous singing and sharing and prayer. Occasionally, someone would speak in an unrecognizable foreign language, a beautiful language, and when finished, another person would rise and say, "I confirm that prophecy," and translate into English what had been said. I had never heard anything like this, and somehow I knew it was real.

And when it was Midnight, there came from above, from that high ceiling, a sound of rushing wind. The people gathered rose up and their hands went up in the air to greet the sound and I felt myself join them.

I've never again experienced anything even remotely like this, nor do I need to. It's one of those things that if someone told me about it, I'd restrain the rise of a skeptical eyebrow. On the spectrum of Christian practice, it is about as far from Lutheran as could be.

And yet it happened.
Email Post
Labels: Life Experience

50+ years ago I was in suburban Chicago (Elmhurst) and my Dad worked in Broadview.