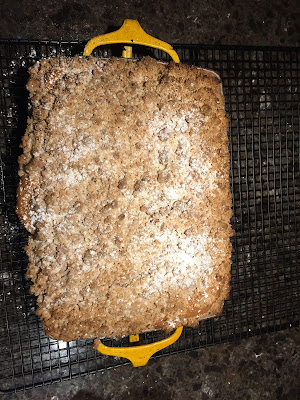 The crumb cake wasn't difficult to make. It did not dirty every pan in the kitchen. A pre-taste of the crumb mixture was rewarding. The aroma of its baking filled the house with anticipation.

It was gorgeous when it came out of the oven. It had risen gloriously. Edwin 1847 had done his work. We could hardly wait until it was cool enough to sample.

Despite the scandalous amount of real butter it contained, the coffee cake was dry. A glass of milk accompaniment helped some. A cuppa coffee helped some. The flavor was excellent. The crumb topping was opulent. But the darned cake itself was very much on the dry side.

I don't know if I'll make it again. If I do, a cup-or-so of floured blueberries might make the difference. Or even a generous handful of shredded zucchini. I dunno. Much to consider. Such as the apricot loaf.

Barbara Anne said…
Sorry for the disappointing results for the coffee cake. I've sometimes wished sprinkling water over a dry cake would help but it doesn't.

We're hoping to find yeast at the grocery this week.

Janet O. said…
What a disappointment. After the aroma and anticipation, and with all you have done to keep Edwin alive, it should have been a glorious burst of tender flavor at first bite. I find it interesting that you have taken on the challenge of sourdough baking during this pandemic. When you were doing the 80 minute challenge, I joined in and tried to overcome my frustrations with gluten free baking. I do believe it worked. I now have an arsenal of a variety of baked goods I feel comfortable making and sharing--even with those who are not restricted to a gluten free diet. I hope you have similar success with Edwin/1847. The pancakes sure looked delicious.
Monday, May 25, 2020 10:41:00 AM

Quiltdivajulie said…
Not all attempts succeed -- DH messed a bit with sourdough but decided to stick to traditional yeast breads as he had far greater success with a lot less fuss and effort. His vienna bread and his dinner rolls are exquisite! Stick with it (Edwin/1847) - you'll find a recipe or two you love or you'll end up passing the starter to someone else. Either way, it's all good.
Monday, May 25, 2020 6:13:00 PM