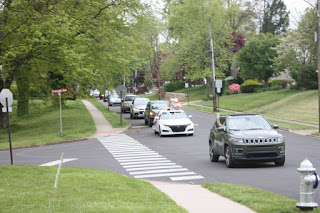 We had quite the commotion in our neighborhood on Thursday. And it was so much fun!

It all started about a week before when one of the neighbors asked me if the food pantry at my church is operating during the sequestration. I was sad to tell her that it is not. I went on to refer her to two other good pantries in the area.

This lady is the mom of four terrific and adorable children and it seems that Jenna, the second oldest, was about to turn twelve. Since she couldn't have the birthday party that ordinarily would occur, she thought it would be nice for people to drive by the house and drop of groceries that she'd donate to a food pantry. 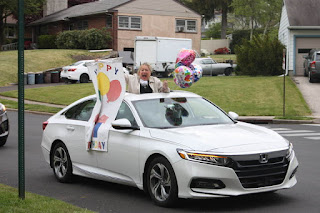 Like many households, I suppose, our personal pantry isn't overstocked right now. But on the appointed day we rummaged around and found an assortment of things and put them in a bag.

We were just in time. I could hear the horns honking out front and when we pulled out of our driveway, there was a line a mile block long! Some of the cars had birthday greeting signs and others sported balloons. There were people -- young and old-enough-to-know-better sticking up out of the sun roofs of some of the cars! It was glorious.

And here's not-so-little Jenna, properly masked, dropping off her bounty. God bless her! 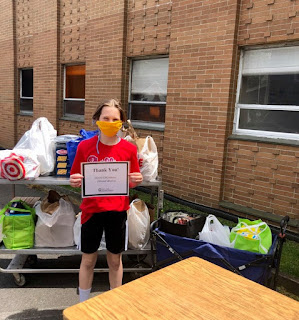 Barbara Anne said…
Inspiring and the creativity of the contributors is just wonderful!

Quiltdivajulie said…
What a remarkable young woman - huge shout out to her for this endeavor. Thank you for sharing it with us!
Monday, May 18, 2020 1:35:00 PM

Mrs. Goodneedle said…
Thank God for these precious young people, those who've been so well raised. I have great faith in the future knowing there are hearts and minds like Jenna's! Happy birthday, sweet girl!
Monday, May 18, 2020 3:54:00 PM