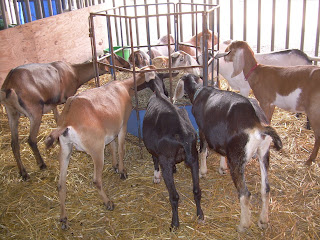 I hadn't known Joe for very long when he invited me to go "up home."  His parents had both grown up in Bloomsburg, Pennsylvania, and had very strong ties to the area.  Not many members of their families had moved away from Bloom, and there was a pull to return to the area.

I'd grown up in a suburb of Philadelphia.  One grandfather had died when I was an infant or before I was born; the grandmother on that side lived in Philadelphia with my aunt.  My other set of grandparents died when I was in elementary school.  I didn't feel any close connection to any of them. 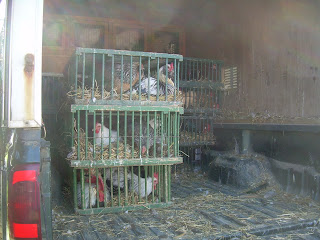 So on that first trip upstate, I had no idea I was about to enter a world totally different from my own.  One of Joe's grandmothers lived in a little house on a hill with a vegetable garden in the back and an apricot tree out front.  We could sit on the porch and pick fruit and eat it right there.  There was no indoor bathroom; instead, there was a two-seater a little ways from the house.  Inside, there were two upstairs bedrooms, and both of the beds had quilts on them.  I'd never seen a quilt before. 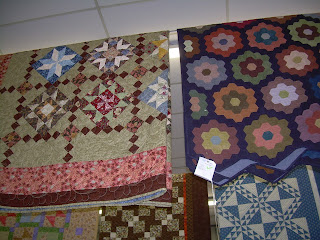 His other grandmother lived in town, not far from her grown daughter and family, and the cousins ran in and out of the house as easily as their own home.  This grandmother always had freshly baked bread on the kitchen table.  And sometimes a couple of pies.  We ate well here. When we stayed with this grandma, I got to sleep in the front bedroom, under a red and yellow quilt.  I slept soundly.  Downstairs, in the cellar, were shelves with canned fruits and vegetables and innumerable jars of jam.  I'd never seen anything like it. 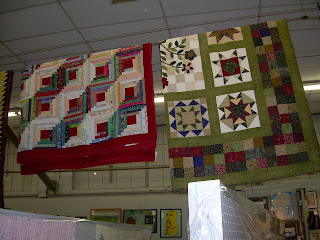 In the autumn, Joe invited me to go back up to Bloomsburg to attend "the fair." I didn't know what to expect, but there was no reason to hesitate.  We stayed at the in-town grandma's house, and early in the morning walked to the fairgrounds.  The vastness of the place was boggling.  We went into a barn that was full of gorgeous cows; another chock-full of sheep and yet another had pigs.  Even a mother pig with little babies.  We walked into another barn and there were chickens, each in its own cage, with something to say.  They were designer chickens of gorgeous colors, some with intricate feathered headpieces. 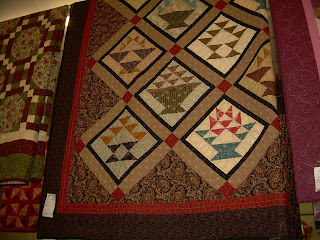 We ate our meals at stands sponsored by the various churches from the area.   Breakfast was buckwheat pancakes, nothing like what my mother occasionally served at home.  All you could eat.  And we could eat pretty many.  After walking and walking, at lunchtime I was glad to sit down when Joe took me to another church stand.  This one had an enormous man out front calling out, "Pierogies!  Pigs in a blanket!"  Was I in for a treat -- never having heard of either of these wonderful things.  The pigs turned out to be ground meat and rice, wrapped in a cabbage leaf, and simmered in a tomato sauce.  Back then, the term "comfort food" hadn't been invented.  But that's what we ate for lunch. 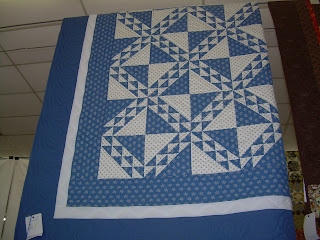 He knew me well enough by then not to tell me about the big barn in the agricultural area.  When we walked in, there were tables with jewel-colored canned vegetables, all in jars.  There were pumpkins of brobdingnagian proportions and glorious specimens of all kinds of vegetables, some I'd never heard of.  And then I looked up.  And saw the quilts.

Reader, I married him!

Lynda Halliger Otvos (Lynda M O) said…
Sometimes marriage is the only answer !~! What a great story teller you are, Nancy. Thanks for sharing this one.
Sunday, September 26, 2010 12:12:00 AM

Pamela Kieffer said…
Oh, your story of Bloomsburg and the
Fair brings back some wonderful memories.
Sunday, September 26, 2010 12:24:00 AM

AnnieO said…
That's a very smart man! What a great experience you had discovering all the goodness of a grandma's house, times two! Thanks for the story and the quilt show.
Sunday, September 26, 2010 1:19:00 AM

Catsngrams said…
What a wonderful story and what lovely pictures. That reminds me of the county fairs we have here.
Sunday, September 26, 2010 2:13:00 AM

Pat said…
Nancy. you certainly have a knack for bringing us along with you on you journies, especially those that vtake us down memories' lane! I have fond memories of going to the Indiana County Fair each year when we would take our Andy and Kate back to school at Indiana University of Pennsylvania. Of couse by then many of the church-sponsored food stands had been supplanted by people selling fried anythings (oreos, Snickers)and funnel cakes, but there was this one place with WONDERFUL home-made apple dumplings....

Barb said…
This is a wonderful blog post, and if you would have traveled a few miles more you could have visited with me :>)...don't you just love the Bloomsburg Fair...food, animals, quilts and even more food! It is a major attraction for many in the Fall, I am sure you enjoyed it! Have a great week!
Sunday, September 26, 2010 4:00:00 PM

Annie said…
We used to visit a county fair like that when I was a kid, but, alas, the fairs near where I live today are all about rides and junk food—not canning, vegetables, animals, or quilts. Love the word "brobdingnagian"! I haven't thought of Gulliver's Travels in years!
Wednesday, September 29, 2010 3:13:00 PM