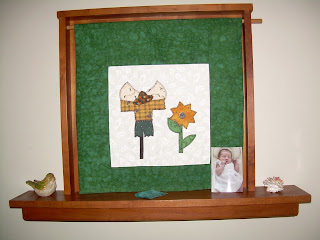 Here is our entry hanging place as it appears today.  I've put the picture of the little girl I mentioned earlier there as well as a piece of fabric from my friend's quilt to remind me to pray for these two in the weeks ahead.  After taking the picture, I added a prayer card from a viewing we attended last evening.  I can see that other things will come and go from this place: obituaries, photographs, fabric scraps, and other kinds of reminders.  This is going to be a good, good thing.

The hangings change with the liturgical season; I've shared others on this blog at various times during one year.  As I've explained, they were a project for a graduate course I took for my S.T.M.

This particular hanging is one for the long "green season" of Ordinary Time -- those weeks between Pentecost and Advent, and also during Epiphany.  It is the only one that I did not applique.  But there is a wonderful story connected to it, and I will share it with you now:

Many years ago, I was involved in an internet block swap that was about angels.  Each month participants designed and appliqued angels in a specific color or for a specific theme.  Oh, did I accumulate angels, as I just couldn't resist participating, month after month.  A newcomer to the group, about halfway through the project, wrote to ask if it was okay to include boy angels.  She had lost a son and wondered about that, because all we'd exchanged were angels in dresses.  I wasn't in charge of the swap, but I boldly responded immediately that of course we could have boy angels and, in fact, I was doing a boy angel for that very month.  I quickly got Joe busy designing a boy angel with a baseball cap, ball, and bat.  When I received Darlene's angel, I was struck by the theological implications of her design -- the scarecrow looking for all the world like a crucifix, and the sunflower bringing new life by its side.  I wrote and told her my thoughts, and the scarecrow block was put into the box with the many, many other angel blocks.

Several years later, when I was working on my liturgical hangings project, I got to the point of Ordinary Time and was stuck.  I'd had no trouble with the crown of thorns for Lent, the manger scene for Christmas, the candles for Advent, the birth of the church for Pentecost.  I'd even figured out how to do Epiphany.  I was at my computer, working on the paper that I would submit to accompany my fabric hangings, hoping and praying that somehow, before the paper was due, I'd have a design for the green season, even if I didn't have that particular hanging complete.

The paper was a long one.  It had to include a background study of the various symbols used for each season as well as the methodology and rationale for the hangings I designed.  While I was writing, that familiar voice "You've got mail!" caused me to pause.  The incoming email had an unfamiliar name.  It turned out to be from Darlene, the mother of the angel boy, who had been thinking about me and the old angel swap that very morning.

LoieJ said…
Such a great idea: a reminder of who to pray for in a spot you notice often, a seasonal decoration, and showing your work. I think that I could find a way to remind myself of who to pray for when I am in the kitchen. I like to do "arrow prayers" while I'm washing dishes.
Friday, September 24, 2010 10:01:00 AM

Mrs. Goodneedle said…
I'm not sure I will ever see another scarecrow without thinking about this very story. God's timing is always perfect.
Friday, September 24, 2010 6:47:00 PM

Denise in PA said…
Nancy, this is a beautiful story. Thank you so much for sharing it. I love the thought of a prayer, or remembrance, spot.
Saturday, September 25, 2010 8:36:00 AM

Juliann said…
I am intrigued by this project. I have had an idea for a wall piece - prayer pockets, but haven't quite figured it out. I just love how the spirit has been working through your writing and stitching.
Saturday, September 25, 2010 10:12:00 AM

Susan said…
Nancy, thank you for posting this. I, too, often promise others (and myself) that I will offer prayers, but more often than not I forget. You've got me thinking about what I can use as a visual reminder.
Sunday, September 26, 2010 8:02:00 PM