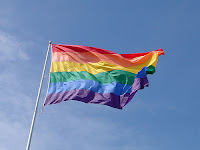 This is a story about when I finally knew I’d been a good mother.

Early in his freshman year of college, our son Andrew made friends with a group that would stick together throughout their four years at GW. One of the guys in the crowd was Chris, a terrific kid with a great sense of humor and a gentle manner. The next year the two of them became roommates, and we saw more and more of Chris. He was a laid-back kind of individual, a good influence on our somewhat hyper son.

In September of senior year, Chris came out to the group. Their reaction surprised him in two ways: First, they said, “Like DUH, Chris.” They’d already known. And second, nothing changed. It wasn’t a factor in their friendship. In fact, a couple of them went along on his first visit to a gay bar, so he wouldn’t be nervous.

Chris’s plan was to tell his parents over Thanksgiving. He was nervous. His friends boosted his courage, promising to be there for him. The week after Thanksgiving break, I asked Andrew, “How’d it go with Chris? How’d his parents take the news?” Andrew hesitated only a second before replying, “Not as well as you would have, Mom.”

Helen said…
Those words say so much to a parent, don't they.

I had a similar situation when my daughter was in high school. One of her friends got pregnant. Her parents made her leave home. My daughter came to me and said, "I know you would never do that to me".

Salem Stitcher said…
That warms my heart so. Not only does it show what a wonderful mother you are but also what an exceptional son you raised.
Thursday, September 16, 2010 10:34:00 AM

Pat said…
Sometimes you wonder if all you did with your kids REALLY made an impression, especially after they have left the nest. And sometimes it's the smallest of things that lets you know you that you have.
Thursday, September 16, 2010 10:41:00 AM

altar ego said…
Okay, I have tears in my eyes. There's nothing so good as a good mom, and nothing so awesome as good parenting. I'd like to think that if I'd had children they would say the same to me. I'll never know, but I'm gonna ride on your wave, just in case.
Thursday, September 16, 2010 1:34:00 PM

*karendianne. said…
Oh Nancy, I'm touched by how they supported Chris and went with him to his first gay bar for support and at the same time my heart is breaking for the way in which is was unloved by his family. I will hold Chris in my heart and in my prayers. Thank you for sharing this very touching story.
Thursday, September 16, 2010 5:04:00 PM

Since my husband and I have raised a child with special needs, it's sometimes hard to feel like a good parent. Especially when people all around are judging you as you deal with your child's behaviors in public. But I've been lucky to have two moments that confirmed that we've been good parents. When my son was dating a girl during his senior year of high school, her mother went out of her way to thank me for raising him to be so good to her daughter. My own daughter spent most of her high school career in the shadow of one of those super stars who seem to have the world by the tail. Yet my daughter told me she wouldn't trade places with her since the girl had all kinds of problems with her mother. And then my daughter went on to say that "my life is practically perfect."

I think deep down we know we've been good parents, but it's soooo nice to get that validation from our children occasionally.
Thursday, September 16, 2010 8:23:00 PM

Anonymous said…
You know you're a good parent when your son accepts his friend without a second thought.

QuiltingFitzy said…
Well! That just confirms my suspicion...you ARE a mom. Way to go my friend, what an accomplishment.
Thursday, September 16, 2010 10:28:00 PM

Lurline said…
I think it is wonderful that your son shows his love for you with a few simple words - often so much is left unsaid!
Hugs - Lurline♥
Thursday, September 16, 2010 10:43:00 PM

Anonymous said…
We are better moms possibly because our moms weren't the greatest. An uplift to your heart - I went to the library today to pick up books on hold and could not find Thousand Acres by Jane Smiley - you had recommended it - well, in my library it is found in the YOUNG ADULT SECTION. I reserved it and today I only feel 30 instead of almost 70!! your CA cuz
Friday, September 17, 2010 12:14:00 AM

AnnieO said…
That's a tribute to both your mothering skills and your son's offspring skills! Glad friendship won out, that's the way it should be.
Friday, September 17, 2010 12:26:00 PM