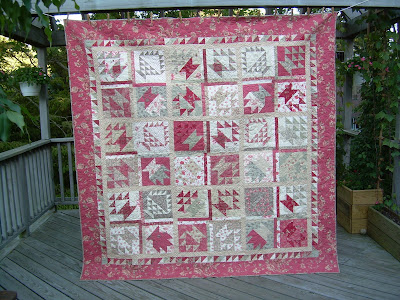 In the past month, three projects have come home from the machine quilters.

Going Rouge:  This quilt was inspired by something I saw on Nicole's blog back during a snow day this past winter.  She was following a pattern and I looked at it and thought, "I think I can do that."  And I set out to do it.

My quilt has six different baskety blocks and is made from a FQ pack of the ever-present Rouenneries by French General.  It was meticulously quilted by my friend Kat who has done beautiful work for me for several years.  I imagine that I will keep this quilt for a long time rather than give it away any time soon.  It turned out pretty much as I had envisioned it and I like it very, very much. 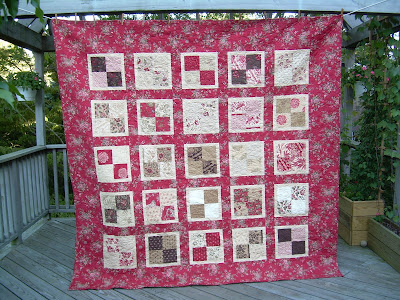 Congratulations, Herb and Elaine:  Here we have a second quilt made from French General fabrics.  I bought two charm packs of Luminiere de Noel and two charm packs of Maison de Garance and selected pairs that looked nice together.  I then used some French General solid to make window frames around the foursomes and the prettiest floral from one of the two lines for the lattice and nice wide border.  The same fabric was also used for the binding.

Herb and Elaine had one of those "no gifts please" weddings earlier this year, and several months later moved into a new home.  I've never been particularly obedient about "no gifts please" situations, and this quilt is to "cover" both occasions -- the marriage and the new home.  It was machine quilted by someone who up until now has always done very nice work, but has disappointed me mightily this week.

Is this the end of my Red Period?  I suspect it is, although I still have some scraps from Going Rouge.  I've had a very good time making both of these quilts.

Kimberly Mason said…
You are, as always, an inspiration! Oh how I love your baskets and your French fabrics. *sigh* I have some of those, but haven't done a darned thing with them!
Wednesday, September 08, 2010 9:18:00 PM

quiltmom anna said…
Loved your going rouge quilts Nancy- it is unfortunate that your long arm person let you down-
The quilts look beautiful in the picture and I am sure your friends are going to love their gorgeous French quilt.
Thanks for sharing-
Regards,
Anna
Wednesday, September 08, 2010 10:15:00 PM

Pat said…
Both are gorgeous, but I just might steal that basket quilt. You seem to have an affinity for both les paniers et rouge.
Thursday, September 09, 2010 9:02:00 AM

altar ego said…
These are both fabulous. And as Kim says, you inspire! Now if only I would do something with the inspiration!
Thursday, September 09, 2010 12:18:00 PM

Barbara Anne said…
Hi! I popped in from Nicole's blog to see your basket quilt. It's lovely!! Applause, applause!