16 Inches Calls for a Treat 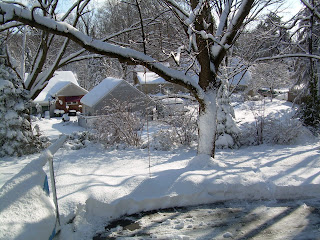 We were blessed by getting the phone call last night instead of being awakened at 5:30 this morning.  School was closed!  The Facebook crowd had been going wild with anticipation and being the first to get the call, I had the delightful privilege of sharing the news through that medium.  The music teacher who had choreographed the virtual snow dance was applauded, and my name was actually chanted!  I guess adults everywhere revert to being about eight when this kind of thing happens.

6:00 came and went and I was blissfully oblivious until Blackberry mentioned at 8:15 that it had been a while, now, hadn't it?  Joe got up and I languished for another half hour and then arose.  Soon after, Bb was sent in with snowballs clinging to his armpits, and Joe continued work with the snow blower. 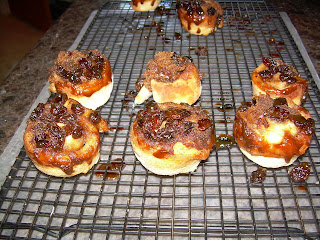 I thought he should have a special treat to reward his exertions and made a batch of banana butterscotch sticky buns, something I've not made in at least a dozen years.  (They are still very, very good.)  Just as I took them out of the oven, the doorbell rang -- it was Joe carrying a couple of scrambled egg and turkey bacon on challah sandwiches from our nextdoor neighbor whose walkway he'd been attacking.  I sent him back with a couple of the buns.

Got the makings of a glorious day here, in gorgeous, snow-covered Near Philadelphia.

Kimberly Mason said…
Warm wishes to you, my darling Nancy, but not TOO warm and not until you are ready for a good thaw. I hope you are well supplied with fabric! (Silly of me to worry, I know :P)
Thursday, January 27, 2011 11:49:00 AM

Quiltdivajulie said…
Gee, I wish I was your neighbor ... those sticky buns sound divine!

OT Quilter said…
The buns look delicious! Isn't it wonderful to be thoughtful neighbors
and to have thoughtful neighbors? I have lucked out in the neighbor department at each house we have owned, with lots of sharing and rejoicing and grieving in good times and bad. (And it doesn't hurt that my neighbors are also bakers!)
Enjoy your day off!
Thursday, January 27, 2011 1:25:00 PM

Mrs. Goodneedle said…
Pat was right, you do have nice buns!

altar ego said…
What a wonderful way to start the day! And a breakfast sandwich on challah is da bomb! Those sticky buns are no slouches, either.
Friday, January 28, 2011 8:58:00 AM

Anonymous said…
I love snow days, especially if they're accompanied by egg sandwiches and sticky buns!
Friday, January 28, 2011 10:37:00 AM