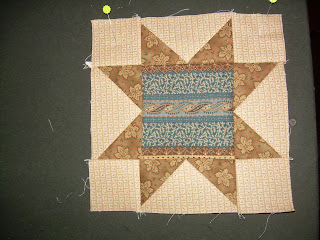 Barbara Brackman published the second block in her Civil War series yesterday and I had a pleasant time making it out of fabrics from my CW scrap tub.

I'd always heard this block called Sawtooth Star; Barbara calls it North Star, a name I prefer.  She says it also has been called Aunt Eliza's Star or Variable Star.

I've done nothing whatsoever about my UFO Challenge for this month.  I'd planned on getting backing fabric at Sauder's yesterday and taking #3, Indigo and Caramel Baskets, to the machine quilter one evening this coming week.  The binding is already made.  But our trip was postponed until the 29th.  I'm wondering if I should look for backing closer to home or swap numbers around on the list.

I think I'll leave this weighty decision until tomorrow.

Update:  Rather amazingly, no sooner had I written this post, than I went downstairs to see which project to swap with #3, and Lo!  and Behold!  I had enough fabric to piece the back!  I've emailed the machine quilter to set an appointment for this week, so it is looking as though I might make this deadline after all!

Gretchen said…
Great block! I need to post mine that is hot off the iron. Hooray for finding a backing in your stash.

StitchinByTheLake said…
I've always called that block a sawtooth star too but north star must be an older name. I haven't started these blocks but plan to soon. blessings, marlene
Monday, January 10, 2011 1:58:00 PM

Anonymous said…
Love the colors in your block. Congratulations on meeting that goal after all. Feels good, doesn't it?
Monday, January 10, 2011 10:44:00 PM

Lorraine said…
I wasn't planning to start anything new...but couldn't resist Barbara's Civil War blocks. Am up to date so far.....but there have only been two and I was on holidays when they were released.
Thursday, January 13, 2011 6:33:00 AM