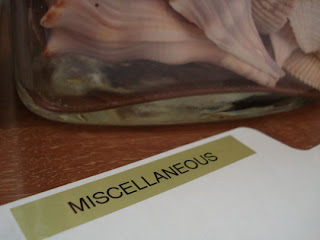 . . . because what it is is a bunch of random thoughts, none of which is well enough developed to warrant a post of its own.  Stay with me if you wish.

Laurie said…
I'm shocked at how much I use algebra in real life. Seriously.

Also, one of my favorite words in the world is "miscellany." But I think it should be pronounced with the accent on the second syllable. Unfortunately nobody ever asked me.

Pat said…
I might have a piece of turquoise LB fabric that will go with your Jungle Song fabs. If I can find it (good luck with THAT), it's yours. Can't wait to see Indigo & Caramel. Mary Ellen did a wonderful job on my daughter's baby shower quilt. Having a good, reliable, fast long-armer in the neighborhood is great.

AnnieO said…
There are a lot of random thoughts that float around, aren't there? One of my favorite words is "mayhaps", which probably is midieval, but I like misc too.

I have one Valentine's Day decoration--which I made last year. Our anniversary is in Feb so we have NEVER gone out for dinner on Valentine's since we have been married, and only once before that, LOL! At least you already bought cards.

OT Quilter said…
I am with you on Valentine's Day. You're right. A person can only do so much. Thanks for the tip on the book. It looks like it may make its way to my mailbox someday soon.
Check out this website, where you can "save a word."
http://www.savethewords.org/
Be patient, it takes a while to load, but it's worth it for us word hounds.
Thursday, January 20, 2011 1:48:00 PM

* I'm totally tired of Sarah Palin in any form

Diana said…
I had to laugh about your cards, because I just came across a stash of cards I bought at one time or another that I "lost" and so never got to mail out. Alas, no Valentine cards in the bunch.
Thursday, January 20, 2011 2:35:00 PM

I have always loved the "logic" of equations, how "if you do something to one side of the equation, you must do it to the other side as well." It's so satisfyingly fair.

Quiltdivajulie said…
Happy that you have a freshly quilted quilt to bind while your random thoughts continue . . . but, like you, it helps me to download some of them onto paper (or keyboard). Frees up space for new ideas and other miscellaneous stuff!

quiltmom anna said…
I do love all the things that you shared- it is a wonderful post Nancy.
Congratulations on winning the 50 dollar gift certificate from Fat Quarter Shop- You are so right that Kim is terrific - She has a wonderful blog too.
Looking forward to seeing your new quilt.
Have a great weekend.
Regards,
Anna
Saturday, January 22, 2011 1:19:00 PM

suz said…
Well, I'm impressed with your use of algebra! My math teacher, Sr. Eleanor, had pupils and students - students were the kids that got it. I was at the bottom of the pupil list. I think she passed me out of frustration. I just never got it. Oddly enough, I worked for accountants for years and could look at a financial statement and know something was wrong.
I have to admit "miscellaneous" is not one of my favorite words. I now work for lawyers and I see too many people throw everything into "miscellaneous" folders and nothing can be found! There is certainly a time and place for miscellaneous. That being said, I do have a miscellaneous stack of fabric :0)
BTW - I love hearing about your school - it sounds like a wonderful place to learn and to work in!
Finally, congrats on winning that gift certificate - that is a great store!
Monday, January 24, 2011 10:15:00 AM