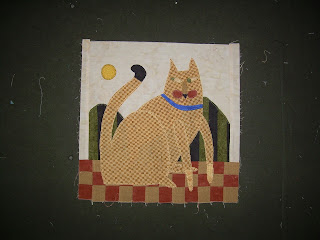 Here's the first block from the primitive folk cats project.  I've no idea how many weeks days hours it took to put this together.  It was too long ago.

I'm thinking that sometime in January I'll dig out another block and fool around with it.  Just one block:  that is what I'm committing to.  Don't push me.

I've been doing the nine-patch blocks for Second Hand Clothes as a leader-ender project.  There are pretty many to make, but I'm liking them.  I traded my blues, pinks and violets to Honna for earthy colors: browns, tans, oranges, greens, reds. 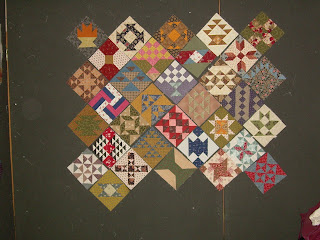 Here's what's on my wall at present.  Look familiar?  Remember that blasted Farmer's Whatever?  I thought she was out of my hair forever when I bound her and gave her away.

Wouldn't you know:  Cecelia, one of the original swappers whom I'd absolved from having to produce her ten blocks after she'd had such a hard time, presented me with eight blocks after FW was finished.  And then dear Pat, another swapper, wisely decided that FW wasn't for her, and handed over the ones she'd made for herself and the one's I'd made for her.

So here I was, at it again.  I decided to go through my Around the Block book and make any six-inch block that struck my fancy.  Using CWs.  And then see what would become of it all.  This is where I am at present: all that Cecelia, Pat, and I have made.  No urgency, no pressure, just fooling around, making cute little blocks.

Tracey @ozcountryquiltingmum said…
That cat block looks like fun...had a giggle about you ending up with more blocks...have fun with it, love and happry new year, Tracey
Monday, January 03, 2011 2:32:00 AM

altar ego said…
I think one piece, one block at a time on the cats is the way to go. Manageable. Measurable.

The other blocks (coming home to Mama!) do look fun.

Judi said…
The Farmer's ....erm.....companion....blocks look VERY cute and are clearly MEANT to be for you.

I think making whatever blocks catch your eye is definately the way to go - sounds much more fun to me.

Of course, you could always put some 9-patches in between, and you would be done.....

Bonnie K. Hunter said…
love love love the kitty block and the sampler blocks! I got a good giggle out of this post! Thanks!

Deb said…
You just can't get away from that darn Farmers Wife can you? I'm working on one as well, and I actually like mine because the store I'm working with as a BOM project, is doing it paper pieced, which makes it much easier to do than using the stupid template method from the book. Good look with your second round of those blocks.
Monday, January 03, 2011 1:58:00 PM