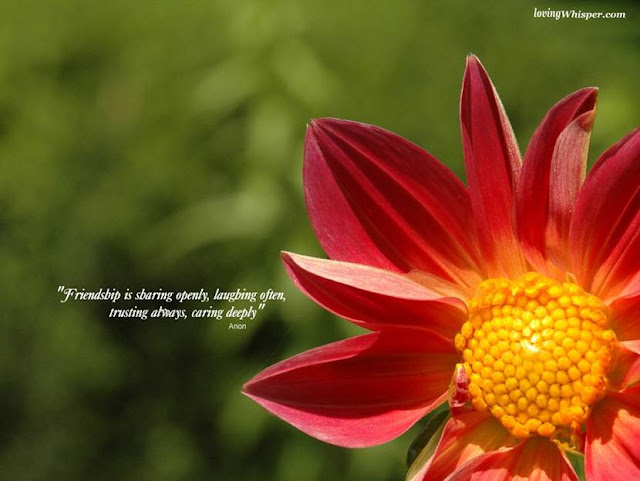 A couple of people have written to ask whatever happened to the longstanding friendship that I had had, the one that seemed to have come to an end.

It came to an end, unfortunately.

It is a long and complicated story, of interest to no one at this point.

Because the friendship had been for so many years, I could not let it go casually.  I looked at the relationship and at the friend long and hard.  I looked at her many good qualities and at the traits -- we all have them -- that are less admirable.  She's bright, she's funny, she's witty; she has many talents involving floss and fiber.  She is generous; she feeds the hungry, visits the sick, all of those kinds of things.

We had a difference of opinion.  It escalated.  This happened and then that.  Finally she was very rude and hurtful to me when we were with a group of people.  Rather than drawing further attention to her behavior by addressing it then and there, I waited until later, imagining that she would look back on what happened and apologize.  When she didn't, I told her how hurt I had been by her behavior.

She did not care.  That was the deal breaker for me.

There will be those who will read this who will know who and what I am talking about.  Heck, for all I know, the woman I write about  may read this.  And to all of them, I want to be perfectly clear:  This woman is not a bad person.  Far from it.  She is basically a very good person.  She just lacks a quality that I find essential after so many years.

Pat said…
I can tell from your post how painful this must have been. To feel devalued after so many years of friendship is sad. Nancy is right. Life is too short.
Monday, January 31, 2011 8:03:00 PM

*karendianne. said…
I learned so much from this post. First - deciding what's a "deal breaker" for you. Identifying that. I respect that. And 2nd - "lacks a quality that I find essential after so many years." That's wisdom. Knowing that.

I'm sad this happened because losing a friend hurts. It hurts for a very long time. You can leave it behind and know you did the right thing, it was time but for some reason it still hurts. At least that's my experience. *But hey, I'm bright, funny, witty and have many talents although I don't feed the hungry and I totally stay away from the sick.

Guenveur in Kent said…
I think the worst part may be that a trust has been broken. We need to know that that we can disagree about things and still remain friends without resorting to hurtful - and hateful-words. Sorrry you had to experience this loss and the hurt of her behavior.
Monday, January 31, 2011 9:04:00 PM

Salem Stitcher said…
To go through so much hurt and still recognize that she is not a bad person takes a quality many people do not possess. You are a rare, wise woman...even wiser to walk away.
Monday, January 31, 2011 11:33:00 PM

Nanci said…
I am very sorry that you lost the friendship and I went through a similar breakup years ago and still remember how hard it was to lose a friend but someone told me afterward that people come in and out of our lives when we need them ( one of us) and when it's over it's because the need is no longer there so you may have just outgrown each other and what you learned over the years made you who you are and we love that person.
Tuesday, February 01, 2011 7:16:00 AM

Anonymous said…
You are indeed a Woman of Wisdom, or WOW as we call them at my church, and your many friends love that about you. I'm fortunate to call you "friend" and feel blessed to have come into your circle. bobbi
Tuesday, February 01, 2011 8:16:00 AM

Judi said…
The thing I find really fascinating about this is that I don't recall ever hearing a woman in the UK talk about such things - which meant that when I was hurt in a similar way to this, I felt it was something peculiar to me. Thank you, Nancy, for letting me know that I'm not that special!

I think I have always felt that, casual acquaintances don't know you well enough to hurt you, but as a friendship deepens, you give them the knowledge, the ammunition to hurt you - and you trust them with it. It's the core of a friendship.

Most friends take the trust we place in them and cherish it. If we hurt a friend unintentionally, we apologise and try to fix it - and they understand that the hurt wasn't meant.

If this lady hurt you and didn't care, then she isn't the right person for you to give the precious gift of friendship. End of - as they say in the UK!